In a reflective, frank and often wryly humorous conversation with U.S. Supreme Court Justice Ruth Bader Ginsburg Monday night (Sept. 12) at the University of Notre Dame’s Purcell Pavilion at the Joyce Center, the justice offered insights into her upbringing, judicial philosophy and hopes for the future of the court.

U.S. Court of Appeals Judge Ann Claire Williams, a Notre Dame alumna and Trustee, asked Ginsburg a series of questions on a wide range of issues. 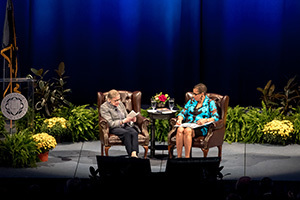 Ginsburg explained the origins of her popular nickname “The Notorious R.B.G.”

“I do know where Notorious R.B.G. comes from,” she said. “It is from a now-deceased rapper, Notorious B.I.G., and when I heard about it, I said, ‘Oh, that’s wonderful, we have something terrific in common. We were both born and bred in Brooklyn, New York.’’”

Ginsburg noted that her mother was a major influence on her life.

“My mom repeated two things many times: be independent, and the other, be a lady,” she said.

Being a lady in this case meant Ginsburg should not waste time on unproductive emotions.

“A lady does not snap back in anger; she isn’t envious; she is a lady,” Ginsburg said. “That is, if an unkind word is spoken, it is as though she didn’t hear it.”

The justice also offered glimpses into her personal life, including her marriage to her husband, Marty Ginsburg, an attorney who died in 2010. She noted that her mother-in-law gave her a set of earplugs as a wedding gift.

“Just before the wedding ceremony, she took me aside and said, ‘I’d like to tell you the secret of a happy marriage,’” Ginsburg said. “What was the secret? It helps every now and then to be a little deaf.”

It’s advice, Ginsburg said, that she still uses today with her colleagues in the Supreme Court.

“When an unkind word is spoken, I tune it out,” she said.

Ginsburg also discussed today’s partisan politics and the impact they have on the Supreme Court. She noted that when she was nominated to the Supreme Court by President Bill Clinton in 1993, her confirmation process took a little more than 50 days and only three members of the Senate voted against her confirmation. She pointed out that Utah Republican Sen. Orrin Hatch was a strong supporter of her nomination, something she doesn’t think would be possible today.

“Someday there will be great representatives on both sides of the aisle that will realize they are not representing the U.S. if they are constantly in conflict instead of in harmony,” she said.

In addition to questions from Williams, Ginsburg responded to a series of questions from select Notre Dame students. Sophomore Prathm Juneja asked the justice how she avoids forming an opinion on particularly contentious cases before arguments are presented.

“I think about how I would like it if they projected their preconceived notions onto their decisions,” Ginsburg said. “Being part of a multi-person bench prohibits you from trying to be queen, because you’re not.”

“I’d rather be notorious,” Ginsburg replied.

“My current answer is as long as I can do it full steam, and that means I have to take it year by year.”

The crowd of more than 7,000 was treated to a light conclusion to the evening. Williams noted that Ginsburg is an opera lover. Williams then led a Notre Dame choir in a take of “La Habanera” from Bizet’s “Carmen” that featured such lyrics as, “She’s Justice Ruth, she speaks the truth.”