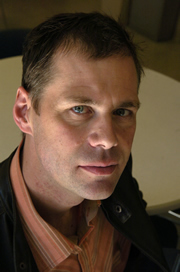 “The Irish Martyr,” a collection of short stories by Russell Working, has been selected as the winner of the 2006 Richard Sullivan Prize for short fiction.

The prize, which has been awarded biennially since 1996 by the University of Notre Dames Creative Writing Program to authors of short stories, honors a distinguished member of Notre Dame’s English faculty, the late novelist and short-story writer Richard Sullivan.The prize includes a $1,000 cash award and publication of the winning work by theUniversityofNotre Dame Press.“The Irish Martyr” will be published by the press early next year.

William O’Rourke, professor English and director of the Creative Writing Program, and Valerie Sayers, professor of English, both of them novelists, served as judges for the prize.

Working, a reporter for the Chicago Tribune, has written stories fromRussiaand theMiddle East.Among the journals in which his fiction has appeared are The Atlantic Monthly, TheParisReview, Zoetrop and TriQuarterly.

The novelist Erin McGraw has praised Workings most recent collection for itssingular compassionin exploringthe private lives of Egyptian adolescent girls, a Korean woman sold to a Chinese farmer, a Russian doctor whose child has been stolen, victims of every time and placeOutrage for the world’s lost and needy fuels The Irish Martyr,and intelligence and deep love imbue every sentence.This book looks at hard truths, and they will linger in the thoughts of its readers.

Richard T. Sullivan was graduated from Notre Dame in 1930 and joined the University’s faculty as a writing instructor in 1936.In addition to writing numerous book reviews for the New York Times and Chicago Tribune, he published several shortstory collections and novels, including “The World of Idella May,” “The Three Kings,” “Summer After Summer,” “The Dark Continent,” and “First Citizen.”A popular undergraduate teacher, he is remembered for his description of writing as “hard work requiring patience and idiotic perseverance.” He died in 1981.