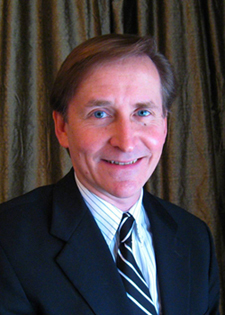 University of Notre Dame astronomer Peter Garnavich and a team of collaborators have discovered a distant star that exploded when its center became so hot that matter and anti-matter particle pairs were created. The star, dubbed Y-155, began its life around 200 times the mass of the sun but probably became “pair-unstable” and triggered a runaway thermonuclear reaction that made it visible nearly halfway across the universe.

Garnavich and his collaborators discovered the exploding star during the ESSENCE supernova search that identified more than 200 weaker stellar explosions.

“ESSENCE found many explosions in our 6 years of searching, but Y-155 stood out as the most powerful and unusual of all our discoveries,” Garnavich said.

Y-155 exploded about 7 billion years ago, when the universe was half its current age. It was discovered in the constellation Cetus (just south of Pisces) with the National Optical Astronomy Observatory’s (NOAO) 4-m Blanco telescope in Chile in November 2007 during the last weeks of the six-year ESSENCE project. The Keck 10-m telescope in Hawaii, the 6.5-m Magellan telescope in Chile, and the MMT telescope in Arizona rapidly focused on the new star, revealing that the wavelengths of light emitted from the supernova were stretched or “redshifted” by 80 percent due to the expansion of the universe. 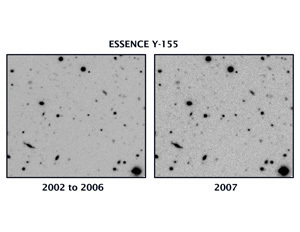 Once the distance to the explosion was established, Garnavich and his collaborators calculated that, at its peak, Y-155 was generating energy at a rate 100 billion times greater than the sun’s output. To do this, Y-155 must have synthesized between 6 and 8 solar masses of radioactive nickel. It is the decay of radioactive elements that drives the light curves of supernovae. A normal “Type Ia” thermonuclear supernova makes about one tenth as much radioactive nickel.

“In our images, Y-155 appeared a million times fainter than the unaided human eye can detect, but that is because of its enormous distance,” Garnavich said. “If Y-155 had exploded in the Milky Way it would have knocked our socks off.”

Over 40 years ago scientists proposed that massive stars could become unstable through the production of matter/anti-matter particle pairs, but only recently have large-scale searches of the sky, like the ESSENCE project, permitted the discovery of these bright, but rare, events.

Most stars bigger than eight times the sun’s mass lose their battle with gravity and produce a “core-collapse” supernova or directly form a black hole. But there is a range of masses, 150 to 300 times the mass of the sun, where the pair-instability is thought to operate. Such massive stars are expected to form in pristine gas that has not been polluted with elements heavier than hydrogen and helium by early generations of stars. Deep imaging with the Large Binocular Telescope in Arizona shows that Y-155 originated in a very low mass host galaxy. On average, small galaxies have a low abundance of heavy atoms, so are excellent locations for pair-instability explosions.

The ESSENCE project was a six-year NOAO Survey Program led by Christopher Stubbs of Harvard University and included an international team of astronomers from the United States, Germany, Australia and Chile. The ESSENCE project was designed to precisely map the expansion history of the universe by discovering type Ia supernovae and using them as distance markers. The ultimate goal is to understand the mysterious dark energy that is driving the accelerating expansion.

The discovery was announced at the 215th meeting of the American Astronomical Society in Washington, D.C., with coauthors Garnavich and the ESSENCE collaboration. The research was financially supported by grants from the National Science Foundation.