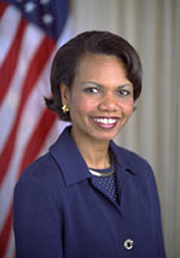 Condoleezza Rice, a 1975 graduate of the University of Notre Dame, was nominated today by President Bush to serve as Secretary of State. The presidents national security adviser the past four years, she will be the first African-American woman to be the nations top diplomat and will be fourth in the presidential line of succession.

A member of Notre Dames Board of Trustees from 1994 to 2001, Rice earned her masters degree from the University in government and international studies. Prior to her service on the Board, she was a member of the advisory council for Notre Dame’s College of Arts and Letters. Rice received an honorary doctor of laws degree and was the principal speaker at Notre Dames 1995 Commencement exercises. She joined President Bush on the platform during the May 2001 Commencement, when the president received an honorary degree and delivered the principal address.

Rice was President Bush’s primary foreign affairs advisor during the 2000 presidential campaign, and she served from 1989 to 1991 in the administration of Bush’s father as director and senior director of Soviet and East European affairs in the National Security Council.

Rice was a member of the Stanford University political science faculty and served as the university’s provost for six years in the 1990s. She is the co-author of “Germany Unified and Europe Transformed” and “The Gorbachev Era” and the author of “Uncertain Allegiance: The Soviet Union and the Czechoslovak Army.”