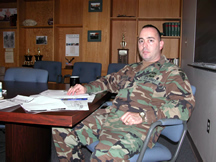 Gary Masapollo was to have been a panelist for the Jan. 31 discussionIraq: What Now?along with faculty from Notre Dames Kroc Institute for International Peace Studies. But then his new orders arrived.

Lieutenant Colonel Masapollo, assistant professor of military science and executive officer of the Notre Dame Army ROTC program, has been assigned to the U.S. Naval Base atGuantanamo Bay,Cuba, as a member of the Office for the Administrative Review of the Detention of Enemy Combatants. For at least six months he will be part of the board that determines who, among some 550 detainees, will remain imprisoned. He and fellow board members will be employing the protocol of tribunals not used by the U.S. military since the Nuremberg War Crime Trials in 1945-1949.

He will do so in a quiet courtroom under hotCaribbeanskies, considering one detainee at a time. The assignment is ironic: He will be in the thick of the decision-making that affects these individuals. Yet he will be separate from the political and legal controversy that has heated up in theU.S.and on other international fronts, that serves as the general publics window on these detainees, and that has inspired many a lively Notre Dame debate.

The prisoners were captured primarily inAfghanistanorPakistanabout four years ago and held, although not charged, because of their alleged connections with Al Qaeda or the Taliban. The Bush administration, the courts, congressmen and human rights specialists have debated: Are they POWs, a familiar term from the Geneva Conventions, or are theyillegal combatantsfighting so far outside conventional definitions of warfare that they have relinquished their rights and their freedom? Are they masterminds, or farmers and young boys coerced into service?

Masapollo left Notre Dame on Jan. 12 to spend a week inWashington,D.C., in briefings and mandatory human rights training. Although familiar with the controversial Bush administration rulings that have dictated ongoing detention, Masapollo had not yet learned the degree of latitude the board would have in deciding the fate of individual detainees. He did, however, have a personal sense of where the line could be drawn about who must stay and who could be released.

The terrorist attacks ofSept. 11, 2001, were carried out by a small cell of people with remarkable fiscal and technological resources.

Id like to think were trying to find those kinds of people,he said.Thats what Im hoping to get out of this: that we find those individuals who are contemplating or in the process of contemplating attacks. I think they are the true threat to the U.S.

Although a newlywed who was married Aug. 19, Masapollo sought the assignment. He holds a law degree and, when posted in Kosovo in 2002, briefly became engaged in the war crimes tribunals administered by the United Nations.

Approaching his 20 th anniversary as an officer, Masapollo foresees retirement. Guantanamo Bay represents a final challenge, he says. And it offers a historic perspective on the rare tribunal process.

I thought: How many people are going to get into the courtroom to see this happen?he said. Among military personnel, only about 15 are on the board.

At Notre Dame, Masapollo has found plenty of colleagues who will debate him on the fairness of the prisonersdetainment. He says he would like to return to the Notre Dame classroom, and to these debates, to contribute the additional dimension of his first-hand experience.