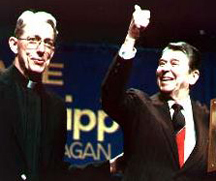 As the nation mourns the loss of President Reagan, who died Saturday, the University of Notre Dame remembers its most famous “subway alum.”p. Reagan had a long association with Notre Dame, beginning with his role as the legendary football star George Gipp in the 1940 film, “Knute Rockne – All American.”p. Rev. Edward A. Malloy, C.S.C., the University’s president, said of the nation’s 40th president: " The Notre Dame family extends its condolences to Mrs. Reagan and the Reagan family as we appreciate the great service he rendered to the state of California and then the entire nation. His optimism, gentleness and deep-seated patriotism were a model for all who hold public office. We also were blessed and honored by his genuine love for Notre Dame. Our legends and his ideals are nicely meshed whenever his story is told."p. At the time the Rockne film was given its premiere in South Bend in October 1940, a young Reagan joined in the local festivities. According to the South Bend Tribune, Reagan, “his voice about to break” spoke movingly of reading about Gipp and Rockne as a young sports announcer in Illinois.p. More than 40 years later, the then president offered similar sentiments when he received an honorary degree and delivered the 1981 Commencement address in the Joyce Center on campus. He said, “During my growing up years in nearby Illinois, I was greatly influenced by a sports legend so national in scope and so almost mystical, it is difficult to explain to anyone who did not live in those times. The legend was based on a combination of three elementsa game, football; a university, Notre Dame; and a man, Knute Rockne; there has been nothing like it before or since.”p. By then Reagan had adopted the role of the 1920s star Gipp as a virtual part of his persona and was widely know as “The Gipper.”p. The Commencement address, which was Reagan’s first public appearance after an assassination attempt in March, also included his memorable — and ultimately correct — commentary on communism, which he called “a sad, bizarre chapter in human history whose last pages are even now being written.”p. The president returned to campus in March of 1988 to dedicate a 22-cent stamp commemorating Rockne’s 100th birthday. During his remarks, he threw a football to Tim Brown, who in the previous December had been voted the winner of the 1987 Heisman Trophy as the nation’s outstanding collegiate football player.p. On that day, the president eloquently described his vision of Notre Dame, saying the University “stands among the winds of subjectivity for lasting values and principles that are at the heart of our civilization and upon which all human progress is built. If they want to see the goodness and love of life of this generation, the commitment to decency and a better future, let them come hereto Notre Dame.”p. Former associate vice president for university relations Dick Conklin recalls that listening to Reagan telling stories in private that day it was evident that the president was very much at home on campus, almost seeming to believe he had actually attended Notre Dame as a student, not just played a role of one in a movie.p. Recognizing this enduring love affair between Ronald Reagan and the University, the president was presented with the genuine Monogram sweater of Gipp during a ceremony at the White House on Jan. 18, 1989, when the 1988 national championship football team made its traditional visit to the White House. The event, just a few days before Reagan completed his eight years in the Oval Office, marked a nearly half century relationship between a famous American university and one of the most beloved presidents in the nation’s history.p. Click here to link to President Reagan’s 1981 Commencement address at Notre Dame.
Here’s the link: http://www.nationalreview.com/document/reagan200406091024.asp p.