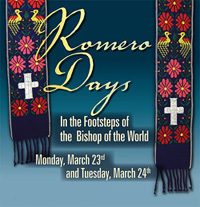 The University of Notre Dame’s annual commemoration of Archbishop Oscar Romero’s life and work, Romero Days, will be held March 23 and 24 (Monday and Tuesday), featuring two distinguished speakers, as well as a student panel and Mass. All events are free and open to the public.

The events are cosponsored by LANACC, the Kellogg Institute and Notre Dame’s Latin American Studies Program, Center for Social Concerns and Shaheen Fund.