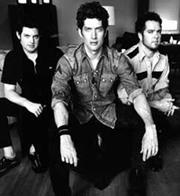 The University of Notre Dame will welcome the popular music group Better Than Ezra to campus for a concert Dec. 2 (Friday) at8 p.m.in theStepanCenter. Tickets are now on sale for $10 at theLaFortuneStudentCenterbox office.

Based inNew Orleans, Better Than Ezra this year released its eighth album, “Before the Robots,” which features the hit single “A Lifetime.” The group produced its first major-label album, “Deluxe,” in 1993 and has since released a number of popular songs, including “Desperately Wanting,” “King of New Orleans,” “At the Stars,” “Good” and “Extra Ordinary,” as well as a modern version of the jingle “Conjunction Junction” for a compilation CD based on the “Schoolhouse Rock” educational children’s television segments of the 1970s through ’90s. More information on the band is available on the Web at www.betterthanezra.com .

The concert is sponsored by Notre Dame’s Student Union Board (SUB), the undergraduate programming organization that provides student services and social, intellectual and cultural opportunities on campus. More information and a complete schedule of SUB events are available on the Web at http://sub.nd.edu .