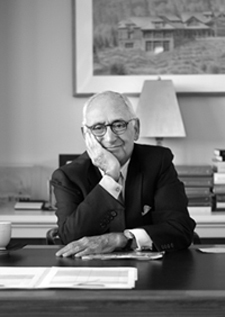 Robert A. M. Stern, whose influential designs have revitalized traditional architecture, has been named the 2011 recipient of the Richard H. Driehaus Prize for Classical Architecture. Stern will receive $200,000 and a model of the Choregic Monument of Lysikrates during a March 26 ceremony in Chicago.

As founder and senior partner of Robert A. M. Stern Architects, and as dean of the Yale School of Architecture, Stern has built a reputation as a modern traditionalist architect. In his work as an architect, as a scholar, and as a teacher, he is dedicated to reconnecting the present and future with the past, building upon what went before to extend the trajectory of architecture.

Stern’s work as an architect is rooted in the principles, values and ideals of classicism and traditional architecture. Comcast Center, a prismatic glass curtainwall office tower in Philadelphia, carries forward the proportions of the classical obelisk; the acclaimed residential tower 15 Central Park West recaptures the spirit of New York’s great pre-war apartment houses; the influential plan for Celebration, Fla., is grounded on a decades-long study of traditional town planning. His current projects include the design of the George W. Bush Presidential Center at Southern Methodist University in Dallas, Texas, and two new residential colleges in the Gothic mode at Yale University in New Haven, Conn. In his writings and in his long and distinguished teaching career, he has reopened the discourse between the new and what went before. He is a committed preservationist and has done much to raise public awareness of the importance of architecture to contemporary life.

“More than any other practicing architect today, Bob Stern has brought classicism into the public realm and the mainstream of the profession, reinvigorating it for generations to come. We are honored to have him among the Driehaus Prize laureates,” says Michael Lykoudis, Driehaus Prize Jury Chairman and Francis and Kathleen Rooney Dean of the University of Notre Dame School of Architecture.

Established in 2003 through the Notre Dame School of Architecture, the Richard H. Driehaus Prize honors the best practitioners of traditional, classical and sustainable architecture and urbanism in the modern world. The Driehaus Prize represents the most significant recognition for classicism in the contemporary built environment.
Recipients were selected by a jury comprised of Richard H. Driehaus (founder and chairman of Driehaus Capital Management), Lykoudis, Adele Chatfield-Taylor (president of the American Academy in Rome), Robert Davis (developer and founder of Seaside, Fla.), Paul Goldberger (architecture critic for The New Yorker), Léon Krier (inaugural Driehaus Prize laureate), and David M. Schwarz (principal of David M. Schwarz Architects, Inc.).