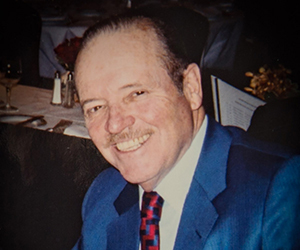 The late Allan J. Riley and his wife, Radwan, have made a multi-million-dollar gift to the University of Notre Dame in support of need- and merit-based scholarships for undergraduate, graduate and professional students. The gift is the largest directed toward financial aid in Notre Dame’s history.

“We mourned two years ago today the passing of a true Notre Dame man in Allan Riley, and now today we celebrate with Radwan this extraordinary gift for which he and she will be remembered in perpetuity at his alma mater,” said Rev. John I. Jenkins, C.S.C., University president. “We cannot thank them enough for a gift that will make a true difference in the lives of young people seeking an education of the heart and the mind at Our Lady’s University.”

Thomas G. Burish, the Charles and Jill Fischer Provost of Notre Dame, added: “The Rileys have been generous supporters for many years, particularly in the arts. I am deeply appreciative of this transformative gift in support of our highest institutional priority, financial aid for deserving students.”

The gift made through Mr. Riley’s estate will be used to support two distinct scholarships:

The initial awards of the two scholarships will be for the 2017-18 academic year. At least 15 percent of the funds drawn annually for the scholarships will be used to assist graduates of schools operated by the Order of the Brothers of the Blessed Virgin Mary of Mount Carmel (often referred to as Carmelite Schools).

“The focus of Allan’s parents, as well as mine, was to provide their children with education,” Mrs. Riley said. “At times, it was not easy sailing, but they prevailed and succeeded beyond doubt. We both appreciate what they sacrificed on our behalf, and now we feel it is our turn to do something worthy of their memory and honorable effort. We, as they, believe that learning of all kinds is the key to prosperity and understanding the needs of others. We follow in their footsteps to support and help provide education to the young men and women of the world. As Father Jenkins said, it is true that today we mourn the passing of Allan two years ago, but it is also true that we celebrate his love and loyalty to Our Lady’s University.”

Born in Indianapolis and a 1957 graduate of Notre Dame, Allan Riley was a prominent real estate investor who once owned One Time Square in New York City, as well as other properties in the United States and Great Britain.

After graduating, Mr. Riley studied performing arts at Stanford University and served for two years in the U.S. Air Force. In 1964 he moved to New York to join the William A. White Real Estate Company. In the early 1970s, he established his own real estate firm, Allan Riley Realty Inc.

A patron of the arts, Mr. Riley made a gift to Notre Dame in 1982 to renovate a chemistry building on campus, now the Leo and Edna Riley Hall of Art & Design, named in honor of his parents. The Rileys have funded annual student scholarships in the fields of design, art history, studio art and photography, and he served on the advisory council for the University’s Snite Museum of Art. Among his permanent gifts to the museum are a portrait painting by Joshua Reynolds and a landscape painting by Louis Remy Mignot. In 2002, the Rileys funded the purchase of 40 British drawings from the 18th and 19th centuries that remain part of the Snite’s Riley Collection.

Mr. Riley served on the Smithsonian American Art Museum Board of Directors, Save the Children Board and the Lincoln Hall Boys Haven Board. Allan and Radwan supported the International Theological Institute (ITI) at Trumau, Austria, and served on its Board of Directors. Mr. Riley’s remains are interred in The Chapel of Trumau, the ITI’s headquarters.

A native of Enfeh, Lebanon, Radwan Riley is a graduate of Beirut College for Women, known today as Lebanese American University, where she earned an arts degree. She moved to the United States in 1971 and joined the Permanent Mission of Bahrain to the United Nations, and then joined Save the Children Federation in 1978.

Mr. and Mrs. Riley established the Allan and Reda Radwan Riley Foundation, which focuses on educational and charitable giving. Among Radwan’s benefactions is a gift to endow scholarships in the name of her parents, Aref and Helena Jabbour, at the Lebanese American University for students from her district, mainly her hometown. Mrs. Riley serves on the ITI Board of Directors in Vienna, and is a supporter of the ITI.