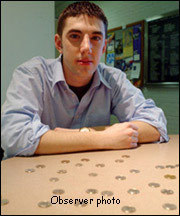 When Notre Dame senior Patrick Quill went home for winter break, he didn’t know his time away from the Golden Dome would lead to a golden opportunity. But there it was, in the pages of his daily paper.p. “I read an article in the Washington Post calling for artists to work for the U.S. Mint,” Quill recalls. “The application was due over break, so I figured it was worth a shot since I was just relaxing anyway.”p. Quill, a marketing and art studio major from Crofton, Md., took a chance and sent in his application, which included slides of his work and a sample design for a new quarter. Of more than 300 applicants, he was one of 24 artists chosen to design new coins for the mint. The National Endowment for the Arts assisted in selecting the pool of artists, which is comprised of two equal groups ? 12 professional artists, called “master designers,” and 12 “associate designers,” who are college and graduate-level art students, like Quill.p. Through the mint’s Artistic Infusion Program, Quill will be invited to submit new designs for specific coin and medal programs throughout the year, including the 50 State Quarter Program, which still has 20 coins remaining to be issued. In addition to coming up with ideas for the five quarters that will come out this year, Quill also is working on a design for a new nickel that will be released in 2005.p. If one of his designs is chosen for a new coin or medal, Quill will receive an honorarium and, for certain coins, be named as the designer in historical documents.p. “I think it is a great honor, considering coins are in circulation for about 30 years and then they are around for thousands of years or more,” he said. “It is amazing that I could be part of history.”p.