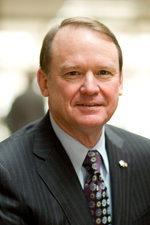 The University of Notre Dame will inaugurate a new award during its 171st University Commencement Ceremony May 15.

As the University looks forward to the 50th anniversary of its Board of Trustees, it will award the Hesburgh-Stephan Medal, named in honor of the late Rev. Theodore M. Hesburgh, C.S.C., Notre Dame’s 15th president, under whose leadership the Board was established, and Edmund A. Stephan, first chairman of the Board. It will be given to a Trustee, whether lay or a member of the Congregation of Holy Cross, for uncommon and exemplary contributions to the governance and mission of Notre Dame during his or her tenure on the Board. The medal celebrates the dedication of those who serve as Notre Dame Trustees, and the critical role Notre Dame’s Board plays as the governing body of the University.

“We are proud to announce that the first recipient of this new medal is our current Board chairman, Richard C. Notebaert,” said Rev. John I. Jenkins, C.S.C., the University’s president. “Dick has served as our chair for the past nine years and epitomizes all of the characteristics for which this award has been created.”

A widely respected leader known for his energy, vision and moral character, Notebaert was elected the sixth chairman of Notre Dame’s Board in 2007. Under his stewardship as chair, Notre Dame has attracted its most diverse and academically competitive students ever, provided more financial aid and welcomed more low-income students, launched the largest construction program in the University’s history, grown its endowment to record levels and realized historic levels of research funding. He will become chairman emeritus on June 30, to be succeeded by John J. Brennan.

Notebaert is the retired chair and chief executive officer of Qwest Communications International. He also served as CEO of Tellabs Inc., a network equipment company based in Lisle, Illinois, and chair and CEO of Ameritech, and he currently serves on the board of directors of Aon plc and American Electric Power. He is a graduate of the University of Wisconsin.

In addition to recognizing distinguished service, the Hesburgh-Stephan Medal memorializes two icons of Notre Dame’s 174-year history and reflects their extraordinary partnership in leading the University. In 1967, Father Hesburgh and Stephan framed the legal structure under which Notre Dame shifted from a governance model of clerical control to its current two-tiered model of a Board of Fellows and the full Board of Trustees, both including lay and religious members. The change made Notre Dame the first major Roman Catholic university in the world to move to this model, and the new charter — embodied in the relationship of trust between Hesburgh and Stephan — became a blueprint for similar changes at religious institutions around the country.

“The complexity of a modern research university demands an effective governing board, and it was part of the genius of Father Hesburgh and Edmund Stephan to fashion a board structure that serves the distinctive Catholic mission of Notre Dame,” said Father Jenkins. “With the Hesburgh-Stephan Medal, we wish to recognize the vital contribution of Trustees to the life of Notre Dame and celebrate and sustain their uniquely collaborative leadership and shared ownership of Notre Dame’s mission.”

Father Hesburgh’s 35-year legacy as the University’s president included the introduction of co-education and a dramatic increase in its enrollment, unprecedented expansion and enhancement of its campus, exponential growth in its endowment, advancement to the front rank of American higher education, and emergence as one of the world’s preeminent Catholic universities. Edmund Anton Stephan, a prominent Chicago lawyer and 1933 Notre Dame alumnus, served as Notre Dame’s chairman until 1982, when the bylaws he himself wrote mandated his retirement at the age of 70. He remained a trusted adviser to Father Hesburgh until his death in 1998.