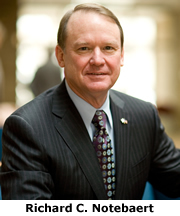 Richard C. Notebaert, chairman and chief executive officer of Qwest Communications International, was elected Friday (Feb. 2) to a three-year term as chair of the University of Notre Dames Board of Trustees, effective July 1. He will succeed Patrick F. McCartan, who has served on the Board for 18 years, the last seven as chair and a Fellow of the University.

It has been a privilege to serve as a Trustee of Notre Dame for the past 10 years, and I am honored that the Trustees have elected me as their sixth chairman,Notebaert said.I look forward to joining with our president, Father John Jenkins, in advancing our position as the premier Catholic research university in the world.

A member of the Notre Dame Board since 1997, Notebaert has served as chair of its University Relations and Public Affairs and Communication Committee. He also has served as a Fellow of the University, and will continue to do so. The Fellows – six lay members and six priests of the Congregation of Holy Cross, Notre Dames founding religious community – are the Universitys ultimate governing body. They elect the Trustees, adopt and amend the bylaws, and are specifically charged with maintaining Notre Dames Catholic character.

A graduate of theUniversityofWisconsin, Notebaert is a member of the board of directors of Aon Corp., Cardinal Health Inc., theDenverCenterfor the Performing Arts and theDenverArt Museum. His professional activities include memberships in theBusiness Council and the International Advisory Council of the ExecutivesClub ofChicago. In April 2003 he was appointed by President Bush to the National Security Telecommunications Advisory Committee.

Notebaert and his wife, Peggy, have two children, Michelle and Nicole, and five grandchildren.

McCartan is senior partner of Jones Day, an international law firm with 29 offices worldwide. His tenure as chair of Notre Dames Board was highlighted by the election in 2004 and inauguration in 2005 of Father Jenkins as the Universitys 17 th president.

Notre Dames Board of Trustees was established in 1967 when governance was transferred from the Congregation of Holy Cross to a two-tiered, mixed board of lay and religious Trustees and Fellows. The Board now numbers 53 active members and 35 Life Trustees.