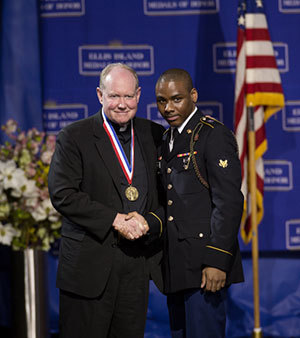 Father Scully is pictured with a member of the Joint Service Color Guard, who presented him with his Ellis Island Medal of Honor. Photo courtesy of the National Ethnic Coalition of Organizations.

Rev. Timothy Scully, C.S.C., Hackett Family Director of the University of Notre Dame’s Institute for Educational Initiatives, received a prestigious Ellis Island Medal of Honor from the National Ethnic Coalition of Organizations (NECO) at a ceremony in New York on Saturday (May 10). He also provided the invocation at the event.

NECO presents the Medals of Honor every year to a group of American citizens who live a life dedicated to helping others; preserve and celebrate the traditions and values of their ancestry group; encourage tolerance and acceptance among ethnic, racial and religious groups of the world; and share their gifts for the benefits of humanity, “proving themselves valuable citizens of the United States.” Past medalists include six U.S. presidents, Nobel Prize winners and leaders of industry, education, the arts, sports and government. NECO honors those who make freedom, liberty and compassion a part of their life’s work.

Father Scully was recognized for his exemplary service and commitment to Catholic schools through his founding of the Alliance for Catholic Education (ACE) at Notre Dame. Since its founding, ACE has prepared thousands of Catholic school teachers and leaders to serve as teachers and school leaders in predominantly under-resourced schools. ACE strengthens and transforms Catholic schools through an array of research-based programs, including the innovative Notre Dame ACE Academies, which have closed the achievement gap for inner-city students. ACE’s efforts also include building support for Catholic education at the national and local level.

The Medal of Honor ceremony took place on Ellis Island, the iconic gateway through which 12 million immigrants passed during the first half of the 20th century in their pursuit of the American Dream. For more details, visit www.neco.org/medal-of-honor.