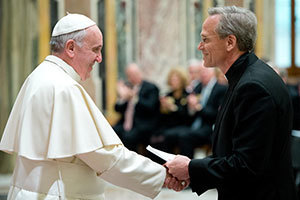 During his historic visit to the United States, on Thursday morning (Sept. 24) Pope Francis delivered the first-ever papal address to members of Congress and an audience that included Rev. John I. Jenkins, C.S.C., president of the University of Notre Dame.

The pope called on the politicians to rise above partisan politics and drew attention to the plight of immigrants, the environment, the death penalty and other heavily debated issues.

Father Jenkins, who traveled to Washington, D.C., to greet Pope Francis at the White House, said that the pontiff called on Americans to challenge themselves to live up to their ideals.

“Pope Francis spoke with a moral and religious voice, calling our Congress and, through them, all of us to live up to the highest ideals of our nation, ideals embodied in the lives of Lincoln, King, Day and Merton,” Father Jenkins said. “At a time when our nation faces serious challenges and we are mired in polarization, I hope we hear and respond.”

Father Jenkins, along with Notre Dame Vice President for Mission Engagement and Church Affairs Rev. William Lies, C.S.C., was among the pope’s concelebrants Wednesday (Sept. 23) at the Mass of Canonization of Junipero Serra at the Basilica of the National Shrine of the Immaculate Conception.