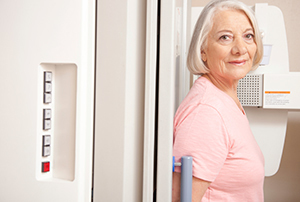 October is Breast Cancer Awareness Month, an annual campaign to increase awareness of the disease and the importance of early detection. Researchers at the University of Notre Dame are conducting innovative research aimed at improvements in early detection by molecular imaging.

Professors Ryan K. Roeder and Tracy Vargo-Gogola are combining their expertise in biomedical engineering and cancer biology, respectively, through the Harper Cancer Research Institute, a partnership between Notre Dame and the Indiana University School of Medicine-South Bend, to improve the accuracy of mammography for diagnosing breast cancer.

“Early detection is the most proven means to beat breast cancer,” Roeder said. “Mammography is very effective, but not perfect. A specific challenge that has received increased attention in the last few years is that some women have higher breast tissue density, which can mask abnormalities from being detected by mammography. To make matters worse, women with higher breast tissue density are more likely to get breast cancer. Numerous states have now passed legislation requiring that breast tissue density is reported to women who receive mammograms, and federal legislation was recently introduced."

Roeder and Vargo-Gogola’s proposed approach is to deliver a radiographic contrast agent that is able to target abnormalities in breast tissue so that they can be seen by mammography even in dense breast tissue.

“The contrast agent uses gold nanoparticles which have molecules attached that target microcalcifications, which are associated with breast cancer, or antibodies which target tumors themselves,” he said. “This approach would not be done for screening of the general population but for follow-up or high-risk sub-populations. For example, a woman with suspicious findings on a conventional mammogram could receive the contrast agent and a follow-up mammogram to either rule out a false positive, which spares the woman the stress and anxiety of a biopsy procedure, or confirm a true positive with a more sensitive technique. The method could also be particularly helpful for women at high risk based on breast density or genetic screening.”

The research recently received funding from the Kelly Cares Foundation and the Saint Joseph Health System.

“We have successfully demonstrated the approach in several preclinical, animal studies,” Roeder said. “The funding we just received from the Kelly Cares Foundation will allow us to investigate feasibility in human-scale models and imaging instrumentation at the Saint Joseph Regional Medical Center in order to build a case for pursuing a clinical trial.”

Although early results of the research have shown that much smaller lesions are being detected using the approach, Roeder and Vargo-Gogola caution that more research remains to be done.

“A clinical trial is realistically at least two years away, and if successful, patients would not widely benefit for at least several more years,” Roeder said. “Unfortunately, research is very costly and time-consuming, but the potential pay-off is immeasurable if we can save more lives.”