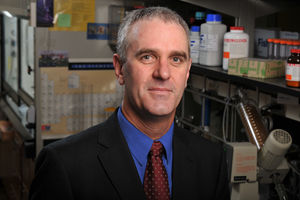 Researchers at the University of Notre Dame have discovered a way to make influenza visible to the naked eye, according to a new study in the Journal of the American Chemical Society. By engineering dye molecules to target a specific enzyme of the virus, the team was able to develop a test kit that emitted fluorescent light when illuminated with a hand-held lamp or blue laser pointer.

Scientists used test samples that mimicked that of an infected patient, and spiked the samples with the enzyme, called neuraminidase, which had been purified from flu virus. The samples emit red fluorescent light as a positive indication of the influenza virus. Blue fluorescent light signals a negative result. The same process also allowed scientists to determine which of two approved antiviral drugs would be a better treatment option for the individual patient.

While still a prototype, researchers believe that with optimization the diagnostic could be developed to be used in point of care clinics or the home environment for a rapid, easy to interpret test for the presence of influenza.

“Viral cultures are the gold standard for diagnosis of influenza but take several days to develop. By targeting an enzyme inherent to the virus and identifying its presence in a sample, we can make a rapid determination of the influenza in a patient for an efficient and immediate diagnostic that would improve patient treatment and reduce overuse of antivirals,” said Bradley Smith, Emil T. Hofman Professor of Chemistry and Biochemistry in the Department of Chemistry and Biochemistry, director of the Notre Dame Integrated Imaging Facility and co-author of the study.

Smith and his team created a new method to detect neuraminidase, which is located on the surface of the virus. Researchers began by designing a dye molecule to emit red fluorescent light when it interacts with the neuraminidase. Following validation of enzyme recognition, researchers then tested the dye with two antiviral drugs used to treat influenza — Zanamivir, also known as Relenza, and Oseltamivir, known widely as Tamiflu. The antivirals are neuraminidase inhibitors. Samples containing dye and neuraminidase were combined with each of the antivirals and illuminated. Red fluorescence indicated the enzyme was still active, meaning the antiviral failed to inhibit the virus in that patient. Blue light indicated the enzyme had been blocked, presenting an effective treatment option.

The study, which received funding from the National Science Foundation and Notre Dame’s research initiative, Advanced Diagnostics and Therapeutics, focused specifically on fluorescence detection of the virus and efficacy of the two inhibitors. Smith’s team hopes to build upon these results in the future.