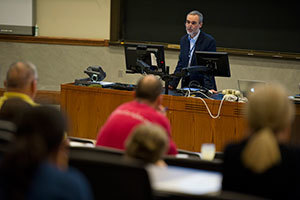 Thirty-two researchers from universities and institutions around the world will present their latest research findings at the 2013 Michael, Marcia and Christa Parseghian Scientific Conference for Niemann-Pick Type C Research on June 13-15 (Thursday-Saturday) in the Jordan Hall of Science at the University of Notre Dame.

The three-day conference is split into seven sessions with international representatives from the Netherlands, Germany, France, New Zealand, Chile, Hungary and Switzerland, as well as researchers from Stanford University School of Medicine, Harvard Medical School, Albert Einstein College of Medicine, Weill Cornell Medical College, Scripps Research Institute, the National Institutes of Health and many other universities and institutes.

The researchers will share their progress on finding treatments for the disease. One group from Notre Dame will discuss how various isoform-selective histone deacetylase inhibitors affect cholesterol accumulation and the use of cholesterol-based dual-ligand probes. Researchers from Weill Cornell Medical College will discuss findings that show the efficacy of certain treatments for a large fraction of Niemann-Pick Type C 1 mutations. Another group will discuss results that provide new insights in the relevance of intracellular cholesterol for neurons in the central nervous system and the role of cyclodextrin in reverting intracellular cholesterol accumulation.

Niemann-Pick Type C (NPC) disease is a rare, fatal neurodegenerative disease for which there is no cure. The disease is a lysosomal storage disorder with autosomal recessive inheritance caused by mutations in either of two genes. NPC primarily strikes children before or during adolescence. One in every 150,000 children is affected by the disease with symptoms that include deterioration of memory and balance, lung and liver failure, delayed motor development and seizures. Through research collaboration, progress is being made on treatments for the disease.

Cindy Parseghian, who lost three children to the devastating disease and founded the Ara Parseghian Medical Research Foundation with her husband, Mike, will co-host a special reception with families affected by NPC on Thursday evening. She will close the conference with a special presentation on Saturday afternoon.

The conference is made possible through a generous gift to Notre Dame by the Ara Parseghian Medical Research Foundation, which established the Michael, Marcia and Christa Parseghian Endowment for Excellence to support NPC research and discovery.