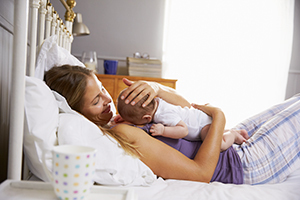 As far as titles in academic journals go, it’s quite the attention-getter. “There is no such thing as infant sleep, there is no such thing as breastfeeding, there is only breastsleeping,” reads the title of a new peer-reviewed commentary piece by University of Notre Dame anthropologists James McKenna and Lee Gettler that appears in the prestigious European journal Acta Paediatrica.

McKenna and Gettler use the term breastsleeping to refer to bedsharing with breastfeeding in the absence of all known hazardous factors. The researchers hope to legitimize it to accommodate and support the millions of American breastfeeding mothers who bedshare as they better manage their milk supply, get more sleep, strengthen their attachments and validate their roles as mothers, especially if working.

Drawing on more than 25 years of research specifically on breastsleeping mother-infant pairs, the data clearly show the need for, and benefits of, immediate and sustained contact, including nighttime contact to establish a foundation for optimal infant breastfeeding, neonatal attachment and brain growth. McKenna and Gettler propose the new breastsleeping concept to highlight the advantages of breastfeeding combined with bed-sharing in the absence of all known risk factors, and why bedsharing when breastfeeding is involved significantly reduces the risks relative to formula- or bottle-feeding/bedsharing.

The researchers propose the term in response to “Safe to Sleep” campaigns initially promoted in the United States and increasingly being imported around the world. The centerpiece of the campaigns is an unqualified recommendation against any and all bedsharing, a form of same-surface co-sleeping. The Notre Dame anthropologists fear, with good reasons, that the campaigns are potentially undermining breastfeeding, and already, at very least, are proving disruptive, causing confusion, and, in many cases, leading mothers to sleep with their babies on more dangerous surfaces such as sofas, rocking chairs and recliners to avoid bedsharing.

As discussed in the proposal, bedsharing in conjunction with breastfeeding has many documented benefits both to infants and mothers alike, which explains why after a decade of intense efforts to eradicate it, the number of families bedsharing has not declined but has at least doubled across almost all sub-groups. “Safe to Sleep” campaigns are proving to be anything but altogether “safe,” insofar as part of its program is to deny new parents leaving hospitals access to safe bedsharing guidelines, should they choose to bedshare. At the same time, these campaigns are putting lactation counselors at odds with their own ethical standards by hospital administrators threatening to fire them should they share with parents ways to reduce bedsharing risks.

McKenna and Gettler point out that over many years, behavioral and physiological studies document how breastsleeping mothers exhibit impressive behavioral sensitivities to their infants’ presence and behavior even while in deeper stages of sleep. Further justification for exempting breastfeeding mothers from the “no bedsharing” mantra is provided by a new, comprehensive British study of SIDS (sudden infant death syndrome) and SUID (sudden unexpected infant death). Unlike other epidemiological studies, this one includes critical, often missing data on breastfeeding, and drug and alcohol use in the context of bedsharing. It shows that in the absence of these and other hazardous factors, bed-sharing is not a significant risk factor for SIDS, and after three months of age, bedsharing may well be protective.

Of course, breastfeeding alone is known to be protective of SIDS, but when combined with bedsharing, a more natural and safer sleep pattern in infants is facilitated that is characterized by lighter sleep with more arousals and more breastfeeds per night. All of this augments the protective effects of breastfeeding as protection is dose-specific — that is, the more the breastmilk, the better. Breastsleeping also potentially adds protection by helping infants to avoid the often dangerous, deeper sleep associated with formula feeding and solitary infant sleep.

Because research increasingly suggests that breastfeeding and co-sleeping are physiologically and behaviorally interdependent, essentially constituting one integrated system (hence the term breastsleeping), it could serve as a means of resolving what has become a stagnant and unproductive, if not dangerous, stalemate between the American Academy of Pediatrics and lactation consultants worldwide, who support breastsleeping. The problem has been that the AAP has always considered bedsharing to carry one, singular, immodifiable, uniform high risk, regardless of feeding method and the overall circumstances by which it is practiced — an assumption scientifically unsupportable. McKenna and Gettler suggest that the concept “breastsleeping” may be a particularly useful concept to help open up a conversation aimed to distinguish “types” of bedsharing and a way to reduce the insularity of the committees making recommendations, especially by including parents for whom the recommendations are intended, voices neither heard nor heretofore listened to by “top-down” medical and governmental agencies.