With the continual increase in demand for global energy, scientists across the world are working to find a way to transition from fossil fuels to renewable energy sources that are more efficient and environmentally friendly. The sun delivers more energy to the Earth’s surface in one hour than the entire world uses in one year, and realizing the full potential of solar power will require finding effective, inexpensive ways to utilize this vast energy source.

Researchers at the University of Notre Dame have identified a possible inorganic material for perovskite solar cells, which provides a lower-cost alternative to the organic polymers currently used in the cells. The study was published in the Journal of the American Chemical Society by Jeffrey Christians, a graduate student in Notre Dame’s Department of Chemical and Biomolecular Engineering; Prashant Kamat, Rev. John A. Zahm Professor of Science; and Raymond Fung, an undergraduate student at the University of Waterloo.

“Of all the potential renewable energy sources available, solar energy is really the only option that has the potential to completely meet humanity’s energy needs,” said Christians. “However, to reach this ambitious goal, there needs to be a transformative solar cell technology that dramatically lowers the cost for consumers.” 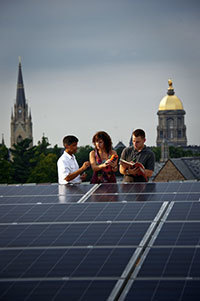 Professor Prashant Kamat, left, works with graduate students on the solar panels on the roof of Stinson-Remick Hall of Engineering

Organo-lead halide perovskite solar cells have recently emerged as one of the most promising candidates for the next generation of solar cells, with record efficiencies increasing from just a few percent to more than 15 percent in just a few years. However, these solar cells have exclusively used organic hole conducting polymers, which are one of the components responsible for conducting electricity in the cells. These organic polymers are generally expensive because they are synthetically produced and must be pure for photovoltaic applications.

“This is our first attempt to employ bench-top technology to design simple and cheaper solar cells with efficiencies competitive with current commercial photovoltaic devices,” Christians said. “This work opens the door for further research and the exploration of a range of inorganic materials, potentially making these already inexpensive solar cells even more affordable.”