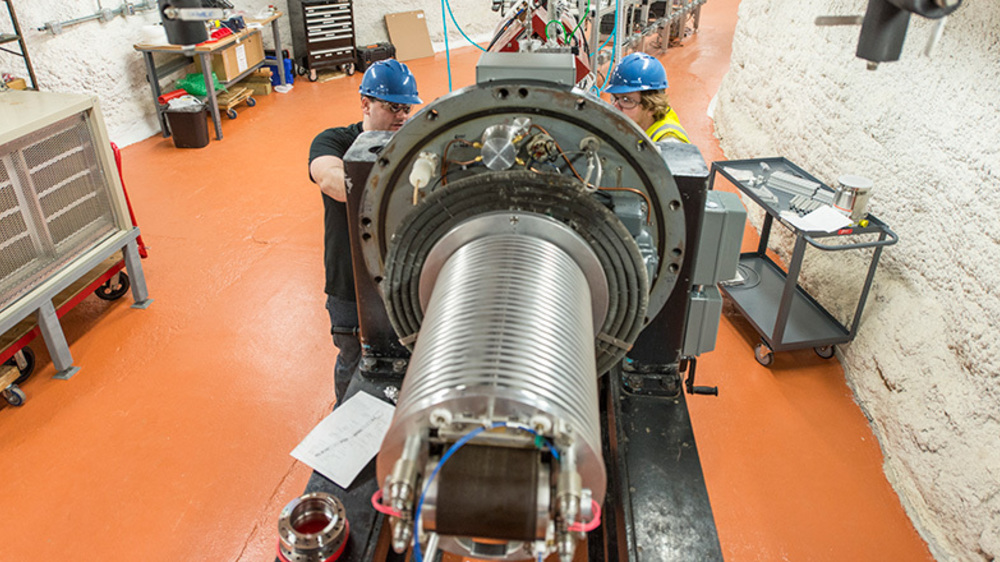 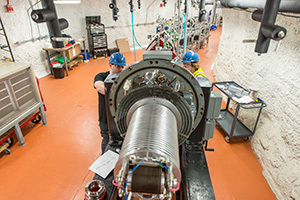 Nuclear astrophysicists successfully created the first low-energy particle accelerator beam deep underground in the United States, bringing them one step closer to understanding how the elements of our universe are built.

Through the project, called CASPAR (Compact Accelerator System for Performing Astrophysical Research), researchers will recreate the nuclear fusion processes responsible for energy generation and elemental production in stars, to understand more about how stars burn and what elements they create while doing so.

CASPAR is one of only two underground accelerators in the world, located at the Sanford Underground Research Facility (SURF), in Lead, South Dakota.

The other, the Laboratory for Underground Nuclear Astrophysics (LUNA) is located in Italy, near Gran Sasso mountain.

“Installing and operating accelerators underground is a considerable challenge,” said Michael Wiescher, Freimann Professor of Nuclear Physics at the University of Notre Dame. “CASPAR is unique since it covers a broader energy range than the LUNA accelerator. It allows us, for the first time, to explore reactions of stellar helium burning, which take place in stars like Betelgeuse, at laboratory conditions. Through these studies, we will learn about the origin of oxygen and carbon as the most important ingredients of biological life in the universe, and we will learn about the mechanisms stars have developed to produce gradually heavier elements through neutron fusion processes.”

Wiescher and Research Assistant Professor Dan Robertson are leading the team from Notre Dame, working in collaboration with researchers from the South Dakota School of Mines and Technology and the Colorado School of Mines. 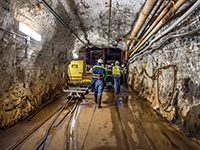 “The complexity of moving an accelerator facility deep underground is greatly outweighed by the potential benefits when recreating nuclear reactions of astrophysical interest,” said Robertson. “Currently, a significant amount of the information we have about reactions that take place in the exact conditions inside a star can only be extrapolated from data in other energy ranges. This is mostly because the probability of that reaction is so small, and without a star’s worth of material to play with, it is difficult to measure when competing with cosmic background. We hope to measure key reactions in elemental production scenarios directly, providing insights into their behavior and helping to understand how and where the material in our everyday lives was produced.”

The 50-foot low-energy particle accelerator was assembled 4,850 feet underground in August 2015 and was transported in pieces from its original home at Notre Dame. Researchers loaded the pieces into a cage elevator and moved them to the experimental space in the former Homestake Gold Mine via mine trolley. Taking the project underground shields it from the cosmic radiation the Earth is exposed to on a constant basis, which can interfere with highly sensitive physics experiments.

“These kinds of studies need an environment free of cosmic rays as only provided at places like SURF,” said Wiescher.

The nuclear fusion that takes place inside a star is what creates the elements that are necessary for life. Older stars, born around the time of the Big Bang, consist of very few elements, while younger stars include a buildup of heavier elements such as lead and gold.

Understanding that buildup of elements is just one of the many questions researchers hope to help answer through a series of CASPAR experiments.

With operations underway, the team plans to begin data collection in the fall.

CASPAR received funding from the National Science Foundation, the South Dakota Science and Technology Authority and the University of Notre Dame. For more on the history of the project, visit nd.features/caspar.