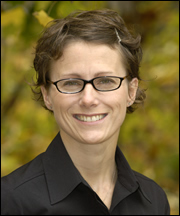 News from the world of sports can be downright depressing these days.

Accusations and confessions of steroid use have run rampant through professional baseball – from New York Yankee first baseman Jason Giambis reported admission to a grand jury that his once bulky body was artificially acquired, to the unsettling, unsubstantiated and – often – unbelievable charges made by former big-leaguer Jose Canseco in a new book titledJuiced.

In the NBA, members of the Pacers and Pistons traded punches with each other as well as withDetroitfans, who themselves behaved like barbarians.

And in the league formerly known as the NHL, the greed and short-sightedness of both owners and players has led to a season-long strike.

These and other instances of (mostly) boys behaving badly are enough to make many wonder if the games people play are worth their time and attention.

But not Nicole LaVoi, an assistant professor of psychology and director of sports education programming at Notre Dame. To her, the trouble on and off the fields of playis a challenge.

As an educator,she says,I think we can do better, and that we have a responsibility to educate.

For LaVoi, that means developing programs to help adults – primarily coaches and parents – create a positive atmosphere in youth sports leagues. After all, if kids today learn proper sporting behavior from well-trained coaches and parents with perspective, theyre less likely to act out in future athletic endeavors.

Athletes are in a flawed system, because there is little to no training given to youth coaches for how to provide a nurturing climate for kids,LaVoi said.If you want to build character and sportsmanship, you have to intentionally create a climate that fosters those attitudes and behaviors. Most youth coaches have no idea how to do that.

Theres a real lack of quality coach education based on social science research in this country. Its amazing, especially when you look at the training given to other people who deal with kids, and then look at the lack of training for coaches.

Spectator behavior is the greatest predictor of good or bad sportsmanship among kids in grades five through eight,she said.Behavior isnt predicated on what kids believe or think, its based on what they observe among spectators, and at that age, the spectators are parents.

To address these areas of concern, LaVoi has developed several programs in an educational series called Play Like A Champion Today. One such program is PACT – Parents And Coaches Together – an initiative based on the latest research from developmental and sports psychology. Created in association with the Minnesota Youth Soccer Association, PACT provides coaches and parents with the tools necessary to help young athletes develop character, well-being, satisfaction and – not to be forgotten – strong athletic skills.

Coaches and parents create a climate that influences young athletessport enjoyment and participation,LaVoi said.Unfortunately, sometimes the climate is toxic, rather than positive and nurturing, which can lead to burnout, dropout, competitive anxiety, loss of self-esteem, and poor sportsmanship.

PACT and other Play Like A Champion programs emphasize the development of young athletes who pursue winning by focusing on competence in the sport, care and concern for teammates and others, and making good choices.

LaVois scholarly interests were borne of her own extensive participation in athletics. A three-sport athlete in high school, she played tennis collegiately atGustavusAdolphusCollegeinMinnesota, where she was part of the Division III national championship team in her junior year. She went on to coach tennis for six years atCarltonandWellesleyColleges, then began her pursuit of a doctorate in kinesiology with a focus on sport psychology and sociology.

I felt strongly that I wanted to coach coaches to do their jobs more effectively,she said.That became my passion.

LaVoi earned her masters and doctoral degrees from theUniversityofMinnesotaand joined the Notre Dame faculty in 2002. She teaches and conducts research in association with the Universitys Center for Ethical Education and Development, which focuses on educational ethics from the perspectives of sport, schools and media and is a part of the Institute for Educational Initiatives.

In order to keep her own competitive fires burning, LaVoi plays in local womens recreational ice hockey and tennis leagues. She also served as the girlstennis coach atSt. JosephHigh SchoolinSouth Bendin spring 2004, a position that helped her stay on top of the coaching profession as a practitioner.

I felt that I was losing my edge as to what its like in the trenches,she said of taking on the coaching duties at St. Joe.I felt I was becoming irrelevant.

I strive to keep one foot on the practical side and the other in research. I believe that everything we do needs to have a practical application to it. I dont want to do research just for the sake of research.