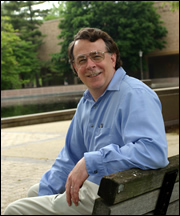 The University of Notre Dame has received a $2.5 million grant from the Grand Challenges in Global Health initiative, a major effort to achieve scientific breakthroughs against diseases in developing countries, for a program to develop a new approach to controlling dengue fever.

The five-year program, titledDeveloping Novel Transgenic Strategies for Introducing Dengue Virus Refractivity in Mosquito Cells and Tissues,will be directed by Malcolm J. Fraser, professor of biological sciences at Notre Dame. Frasers research is being conducted in Notre Dames Center for Tropical Disease Research and Training, a world-renowned research program in the biology, ecology, genetics and molecular biology of tropical diseases and their vector insects.

The ultimate goal of the Grand Challenges in Health Global Initiative is to createdeliverable technologieshealth tools that are not only effective, but also inexpensive to produce, easy to distribute, and simple to use in developing countries.

Dengue viruses are transmitted to humans through the bite of infected Aedes aegypti mosquitoes. Once a mosquito acquires the virus by biting a person infected with dengue, the mosquito remains infected for life and transmits the virus to susceptible individuals during probing and feeding.

Dengue fever usually starts with a high fever and chills and may include headaches, backache and muscle and joint pain. Dengue hemorrhagic fever is a potentially deadly disease characterized by a high fever and may be accompanied by loss of appetite, nausea, vomiting, abdominal pain and nose or gum bleeding. The disease infects up to 100 million people annually.

Since there is no vaccine available for this virus, current control methods rely on relatively ineffective insecticide applications to eliminate vector populations in endemic areas,Fraser said.

Fraser is attempting to develop a new approach to suppress the replication of degue virus within Aedes mosquitoes, using genetic engineering to introduce a molecular mechanism that can harness the virusown genetic molecule to activate a cell death pathway that kills infected cells. Thisdeath upon infectionstrategy would provide immunity against dengue in transgenic mosquitoes. Coupling this immunity with a selectable gene would allow the immune mosquitoes to compete with native mosquitoes, effectively reducing the number of infected mosquitoes and thus limiting the capability of Aedes populations to transmit disease.

If successful, this technology could contribute to a completely new method for controlling dengue fever, and might be applicable to the control of other types of vector-borne diseases that are prevalent in the developing world,Fraser said.

Dengue virus occurs most often in Southeast Asia, Africa andCentral Americabecause Aedes mosquitoes do not survive well in cold climates. Aedes mosquitoes also prefer urban conditions, where they can easily locate sources of standing, stagnant water in which they most successfully reproduce.

The application of this technology will ultimately involve localized release of genetically modified insects into the natural urban population of Aedes aegypti in a manner that will insure propagation of the engineered genetic molecular mechanism for eliminating dengue virus in endemic areas,Fraser said.This would reduce the overall vectoral capacity of the mosquito population and, in turn, the incidence of dengue among the associated human population.

Researchers at the Center for Tropical Disease Research and Training are concerned in particular with the impact of infectious diseases in less developed parts of the world, and their research interests range from biomedical sciences to issues of human rights. Among the diseases studied at the center are malaria, toxoplasmosis, tuberculosis, lymphatic filariasis, leishmaniasis, dengue, andWest Nileencephalitis.

The Grand Challenges in Global Health initiative is supported by a $450 million commitment from the Bill&Melinda Gates Foundation, as well as two new funding commitments$27.1 million from the Wellcome Trust, and $4.5 million from the Canadian Institutes of Health Research (CIHR). The initiative is managed by global health experts at the Foundation for the National Institutes of Health, the Gates Foundation, the Wellcome Trust, and the CIHR.