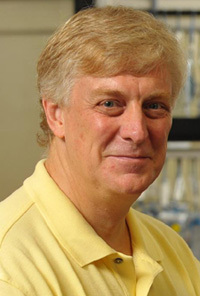 To the naked eye, humans may not appear to have much in common with the zebrafish, a small tropical freshwater species belonging to the minnow family.

But a Notre Dame biologist is taking a much closer look at the two species and finding potential for treating a number of diseases and conditions.

Research by David Hyde, the Rev. Howard J. Kenna, C.S.C., Memorial Director of Notre Dame’s Center for Zebrafish Research, uses adult stem cells in zebrafish to study how neurons regenerate. The work holds promise for treatments for such human problems as glaucoma and macular degeneration in the eyes, Alzheimer’s and Parkinson’s in the brain, and even spinal cord injuries.

“We are actively engaged in using adult neuronal stem cells to examine the processes involved in regenerating neurons,” Hyde explains. “We’re doing this in the central nervous system where these stem cells already reside. We’re working on zebrafish because it’s much easier to manipulate the organism and the regeneration response is very robust. These adult neuronal stem cells also exist in the human nervous system, but they do not generate significant regeneration responses.”

Zebrafish eyes, the size of a large pinhead, have an advanced visual system similar to the human eye, with different types of neurons located in different layers — photoreceptor cells in the outer layer of the retina, ganglion neurons in the inner layer, and different classes of neurons in specific layers between. Hyde’s research focuses on cells in the retina, part of the central nervous system, but the cells also are in the brain. He came to Notre Dame more than 20 years ago and has been involved in the project for more than 13 years.

The research has shown that zebrafish repair retinal degeneration within just four weeks. The regeneration apparently occurs because something is signaling the adult stem cells and radial glial cells to proliferate, divide and differentiate at an enormous rate. Furthermore, the regeneration replaces precisely the right kinds of lost photoreceptors in the area of the retina where they were lost. That’s important, because growth of inappropriate cells could further damage the organism.

Understanding the process of how adult stem cells regenerate the zebrafish retina can lead to discovery of why humans lack the ability. Hyde suspects that some inhibiting mechanism has developed in humans, but the research could reveal ways to restore the power and, using adult stem cells, bring about healing of diseases that result from damage to nervous system cells.

As a Catholic university, Notre Dame realizes the moral and ethical implications of working with embryonic stem cells and is taking a proactive approach in using adult stem cells.

“Notre Dame science is distinctive from other institutions,” said Gregory Crawford, dean of the College of Science. “Our science is not just science alone; we also engage in other broader issues that influence science – ethics and morals and aspects of how our science will better other people’s lives.”