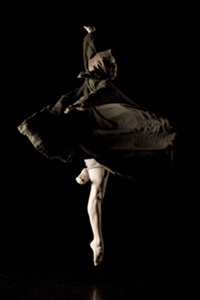 While taking in a show, an audience may not realize that what they’re watching on the stage or screen is research in action.

“It doesn’t translate into test tubes and science in terms of research that way,” explains Anna Thompson, executive director of the University of Notre Dame’s DeBartolo Performing Arts Center and the Judd and Mary Lou Leighton Director of the Performing Arts. “It’s the creative process that is what we do as artists.”

The Performing Arts Center’s research enterprise takes the form of commissions – pieces of work created specifically for the Notre Dame stage or, in some cases, presented in collaboration with other institutions. Artists hoping to find financial support for new projects seek out sponsors with which to form partnerships, and a commission is born.

“They tell you what they’re interested in creating and if it’s in alignment with your mission, vision and values, you should be able to end up with something that works,” explains Thompson.

This performing arts season at Notre Dame has been rich with commissioned work – Diavolo, an athletic dance company that presented an original performance titled “Foreign Bodies” in January; Spectrum Dance Theater, which unveiled its Midwest premiere of “The Theatre of Needless Talents” in February; and Kronos Quartet, which presented a world premiere work by composer Terri Riley last month.

The Spectrum Dance Theater commission was a collection of new works inspired by Jewish musicians who composed while imprisoned in Nazi death camps.

“The work deals with the orchestra members, the vaudevillians who lived in that camp and primarily entertained the Nazis at that time,” Thompson says. “They played as people were marched into the camp. None of these people survived, but their works did.”

As a university presenter, Notre Dame selects its commissions not just for their appeal to audiences, but also for their ability to fit into a larger academic endeavor. Artists don’t just come in for one performance; they spend time on campus in residency, sharing their creative processes with students and participating in dialogue through post-performance talks and scholarly discussions.

“It’s not just about the art form itself; it’s about the dialogue around the piece that’s been created. About the inspiration for the piece and what that stands for,” Thompson says.

Coming up next year, Notre Dame is partnering with Stanford University and the University of Maryland to commission the world premiere of “The RFK Project,” a new docudrama about Robert F. Kennedy by L.A. Theatre Works that will be accompanied by a host of academic offerings.

Arts enthusiasts may not be accustomed to tackling tough social issues while taking in a show , but this is a different way of looking at the performing arts. It’s not just filling seats, Thompson explains; it’s all about engaging minds.

“Our role is to support the academy and the creation of new works, which represents research in our field,” she says. “It’s supporting new works that bear the name of Notre Dame, having our students see the creative process and be part of that process.”