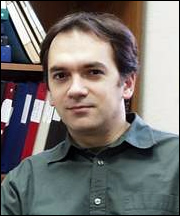 An important breakthrough in the emerging scientific field ofspintronicswas reported this week by University of Notre Dame physicist Boldizsár Jankó and his research team from the Joint Institute for Theoretical Sciences of Notre Dame and Argonne National Laboratoires.

Spintronics is developing as a result of the growing recognition that a replacement will have to be found for silicon, traditionally the key material in computer chips, if processing power is to continue to grow at rapid rates. The continuing growth in the processing power of silicon chips has brought about smaller, faster and cheaper devices ranging from cell phones and personal music devices to laptop computers.

However, at some point, estimated by some experts to be as early as 2010, the fundamental physical laws that govern the behavior of transistors will preclude them from being shrunk any further and packed in greater numbers on computer chips. The continued shrinking of transistors will lead to various problems with electric leakage, power consumption and heat.

Many experts feel that spintronics, combined with nanotechnology, offers the best possible solution to this problem. Nanoscience and nanoengineering involve the study of small devices and device-related phenomena on a spatial scale of less than one-tenth of a micron, that is one-thousandth the diameter of a human hair or roughly the diameter of a DNA molecule.

For the past two years, Jankó and a team of researchers have been using a National Science Foundation Nanoscale Interdisciplinary Research grant to develop and create manmade materials aimed at performing extremely fast functions in computers of future generations. These materials, known as diluted magnetic semiconductor-superconductor hybrids, possess magnetic, optical and semiconductor properties that show great promise for new types of computers. Their research has been aimed at gaining a deeper understanding of these properties, so as to enable their control for the purpose of such applications asspintronics,which exploits magnetic properties to do computing. In spintronics technology, it is not the electron charge, but the electronspinthat carries information, offering opportunities for a new generation of microelectronic devices.

Jankó and his team have developed a theory that they believe offers a solution to these challenges.

In order to understand their solution, it is helpful to call to mind a childhood game in which iron filings are placed on a sheet of paper and a bar magnet is held underneath it. One can manipulate the iron filings via magnetic interactions by moving the bar magnet underneath the paper.

If you separated the filings into two groups and if someone were to hold the paper with the filings for you, you can grab another bar magnet and use it to move closer or take apart the groups created out of the filings. The magnets act as amagnetic tweezersfor the filing groups and moving the two groups together will result in the alteration of their structures.

Jankó and his research team have succeeded in identifying the nanoscale counterparts of the iron filings, the sheet of paper and the bar magnets. Since they are on nanoscale, the counterparts are one billion times smaller than the ones used in the childhood game. They are the spin/charge carriers of a diluted magnetic semiconductor (the iron filings), the quantum well in a diluted magnetic semiconductor (the sheet of paper) and the vortices of a superconductor (the bar magnets).

The superconducting vortex can be conceived of as a spinning tornado at nanoscale. The superfluid eddy current is trapping a dense bundle of magnetic field lines inside its core. This bundle can then be used like a smallspin tweezerto achieve spin manipulation, much as the bar magnets are used as a magnetic tweezer to alter the structures of iron filing groups. If the spin manipulation can be achieved at a scale where quantum effects dominate, one of the most important conditions for quantum computation can be satisfied.

Jankós research findings, performed in collaboration with Mona Berciu of theUniversityofBritish Columbiaand Notre Dame postdoctoral researcher Tatiana Rappoport, are published in todays issue of the journal Nature. In addition, Jankó and another team of researchers have had a paper published in a companion journal, Nature Materials, describing their discovery of pressure-induced magnetism in diluted magnetic superconductors. This discovery paves the way, along the lines of the theory outlined in the Nature paper, for nano-engineering magnetic properties in magnetic semiconductors.