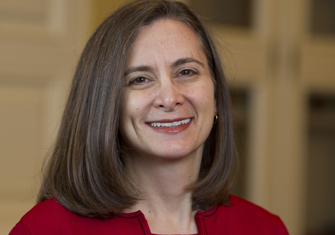 On the morning of Sept. 1, 2004, Notre Dame political scientist Debra Javeline found herself, like many people around the world, glued to the television, watching in horror as the Beslan school hostage crisis — widely known as “Russia’s 9/11” — unfolded.

Dozens of militants from a Chechen separatist group had converged on a school in the Russian town of Beslan in North Ossetia. For three days, the terrorists held hostage more than 1,200 children, teachers and parents. When Russian security forces stormed the building with tanks and rockets, the school gym blew up in flames. Hundreds of people, many of them children, died, and hundreds more were grievously wounded.

Javeline, an expert in mass political behavior, followed the tragedy’s aftermath with deep concern and a social scientist’s eye. What would happen next? Rumors and speculation predicted revenge attacks and even full-scale ethnic war among the ethnic Ossetians (largely Orthodox Christians) and ethnic Chechen and Ingush (largely Muslim) people.

Surprisingly, the retaliation did not occur. Nor did the traumatized community sink into depression and passivity, another potential response, said Javeline. Instead, parents and other survivors pursued “an astonishing level of peaceful and politically constructive action,” Javeline said — forming political organizations, leading demonstrations, and making their voices heard at the highest levels. 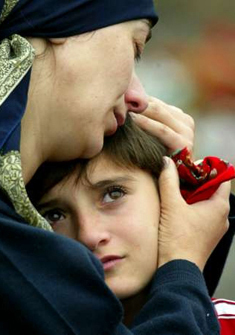 “Obviously killing a child is so traumatic it might make even a nonviolent person violent,” Javeline said. “But these victims were able to take anger and turn it around to fight for justice, clarity and a sense of security.

“These were moms who never in a million years thought of themselves as political activists,” she said. “Yet here they were demanding to meet with the president.”

Why do many people respond to violence with more violence, others with depression and self-destructive behavior and others with motivation to influence their world in productive, nonviolent ways? The answer holds a key to the age-old puzzle of cyclical violence. Javeline, associate professor of political science at Notre Dame, and her research collaborator Vanessa Baird, a political scientist at the University of Colorado, set out to gain insight from the mothers and other victims of Beslan.

With research support from a number of Notre Dame sources (the Institute for Scholarship in the Liberal Arts, Office of Research, Kellogg Institute for International Studies, and Kroc Institute for International Peace Studies) Baird designed surveys and organized extensive interviews (up to two hours each) with 1,098 of the victims, including parents of child hostages, surviving adult hostages, and family members of hostages who were killed. The research was remarkable for reaching an exceptionally large proportion of the victims (82 percent) and for the extreme care interviewers took to avoid retraumatizing the families recalling such a painful event. “Most family members wanted to talk, and many said it was good to know that someone cared,” Javeline said.

In a second phase of data collection, funded by the National Council for Eurasian and East European Research, Javeline and Baird oversaw surveys of non-victim residents of Beslan and Vladikavkaz, the capital of North Ossetia, to test the responses of people living in proximity to violence, even if not directly affected by it.

And in 2008, Javeline received a Kroc Institute Faculty Associate grant, which provided substantial support for a year-long leave to write about Beslan. Her co-authored article, “The Surprisingly Nonviolent Aftermath of the Beslan School Hostage Taking,” was recently published in the academic journal, Problems of Post-Communism. She and Baird are now at work on a book tentatively titled “After Violence: Participation over Retaliation in Beslan.” 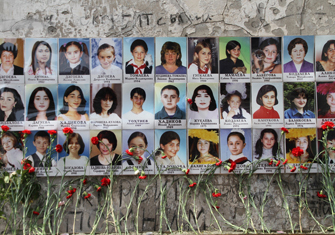 Among the lessons from the research, Javeline said, was the finding that anger and political alienation may be motivating forces for peaceful activism.

“Our research showed that victims who were the angriest, and the most politically alienated, and who had some prior experience with political participation, were the most likely to become peaceful political activists and to avoid lashing out against rival ethnic groups,” Javeline said.

On the other hand, victims who had the least political alienation (who felt a strong attachment to Russia and retained pride in the country and little shame), and who were the most socially alienated, most pessimistic, and most self-empowered, were the most likely to support retaliatory violence.

“Victims of violence who feel ashamed of their country and incredibly angry may be the very victims who give a voice to their community and who deter the community from further violence,” Javeline said.
The Beslan activists have had only modest success in making their voices heard in the Putin government and in international legal bodies, but they have not given up or changed their nonviolent approach. Javeline says she greatly admires their determination in the face of extraordinary loss.

“After years of studying this issue, I still can’t look at photos of Beslan without choking up,” said Javeline, herself the mother of three young children. She hopes her book will not only contribute to political science and peace research but also be a tribute to the mothers of Beslan and to other victims of violence.

“At Notre Dame, I am surrounded by scholars who support high-level social science research and who are committed to the global common good,” said Javeline. “I’m so glad I work at a place where I don’t have to apologize for wanting my work to make a difference in the world.”

Javeline earned her Ph.D. in political science at Harvard University. Her research interests range from mass political behavior to the politics of climate change. At Notre Dame, she is a fellow of the Kroc Institute, Kellogg Institute, Nanovic Institute for European Studies and a core faculty member of the Russia and East European Studies program.