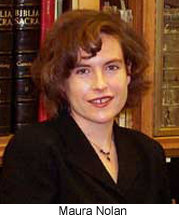 The National Humanities Center, the National Academy of Education and the Indiana Library Federation recently honored three University of Notre Dame faculty members.p. Maura B. Nolan, assistant professor of English, is among 40 fellows chosen by the National Humanities Center for the 2004-05 academic year. She will take leave from normal academic responsibilities to pursue her research.p. Selected from a pool of 526 applicants, Nolan will join other fellows chosen from colleges and universities in the United States, Israel, Norway and Poland at the National Humanities Center in Research Triangle Park, N.C. She will pursue research on a book titled “English Fortune: The Early History of a Literary Idea,” which examines the literary and historical representations of destiny and fate in the late Middle Ages in England.p. The National Humanities Center will grant $1.3 million for this year’s fellows, with funding made possible by the center’s endowment, contributions from alumni fellows of the center, and grants from the Gladys Krieble Delmas Foundation, the Jessie Ball duPont Fund, the Horace W. Goldsmith Foundation, the Florence Gould Foundation, the A.G. Leventis Foundation, the Lilly Endowment, and the National Endowment for the Humanities.p. David Campbell, assistant professor of political science, is among 20 scholars chosen to be a 2004-05 National Academy of Education/Spencer Postdoctoral Fellow. Selected from a pool of more than 160 applicants, Campbell will examine the decline of political and civic engagement in young people and focus on ways in which schools can foster a sense of civic duty among students.p. The fellowship, which includes a cash award, is administered by the National Academy of Education and is funded by a grant from the Spencer Foundation. Its purpose is to develop new scholarly talent, and it is the oldest source of support for education research, both nationally and internationally, for recent recipients of the doctoral degree.p. J. Douglas Archer, a reference and peace studies librarian at the Hesburgh Library, has received the 2004 SIRS Intellectual Freedom Award from the Indiana Library Federation.p. The annual award recognizes the contribution of an individual who has actively promoted intellectual freedom in Indiana and is administered by Social Issues Resources Series, Inc.p. Archer is an ordained minister in the Church of the Brethren and has been an active member of the American Library Association’s Intellectual Freedom Roundtable. He has served on of the Indiana Library Federations Intellectual Freedom Committee and has been a frequent speaker on the issue.p.