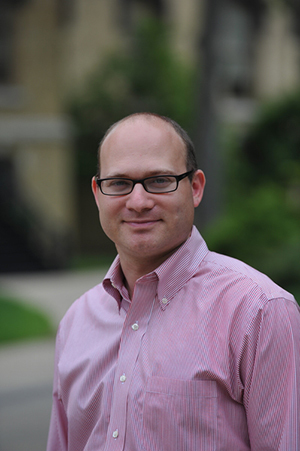 Remarks as prepared by Jonathan Noble, assistant provost for Asia at the University of Notre Dame, at the seventh annual U.S.-China Consultation on People-People Exchange. The event will take place June 7 (Tuesday) at the National Museum of China in Beijing.

Ladies and gentlemen and distinguished panelists, it’s my honor to represent the University of Notre Dame at this important forum and signing ceremony as part of the seventh annual U.S.-China Consultation on People-to-People Exchange, or CPE.

The CPE plays an important role in providing a framework and platform for strengthening cooperation between the U.S. and China in many important areas, such as education, culture, the arts and athletics. The University of Notre Dame is proud to support the shared goals of the CPE to enhance cooperation and mutual understanding between our two countries. I am also very thankful to China’s Ministry of Education and the Federation of University Sports of China for inviting me to participate on this distinguished panel. The more somber conversations regarding U.S.-China relations will place during the eighth session of the U.S.-China Strategic and Economic Dialogue, but I believe in this room, we are all passionate about the future of cultural, educational and athletic ties between our countries, and their importance in advancing international cooperation.

The president of the University of Notre Dame, Rev. John I. Jenkins, states: “We have not just an opportunity, but a duty to think and speak and act in ways that will guide, inspire and heal … for all our neighbors in the nation and the world.” The importance of the University’s vision has been recognized by leaders in the United States, including President Obama, who stated, sportively, in his commencement speech at Notre Dame in 2009: “If you need a 6’2" forward with a decent jumper, you know where I live.” The president of Notre Dame recently brought together Vice President Joe Biden and John Boehner, former Speaker of the U.S. House of Representatives, at the 2016 Commencement, despite their very different political positions, in the spirit of mutual respect and constructive dialogue.

The University of Notre Dame, as a preeminent Catholic university, is committed to strengthening human solidarity through excellence in research, education and international cooperation. In China, we greatly value our relationship with the Ministry of Education, through which we have developed collaborations in research, doctoral studies, and exchange and mobility programs for faculty and students across many disciplines.

In cooperation with the Ministry of Education’s National Academy of Education Administration, the University of Notre Dame hosted 40 leaders of Chinese universities for seminars on higher education in the U.S. and China. The president of the University of Notre Dame, Rev. John I. Jenkins, C.S.C., attended the U.S. and China University Presidents’ Roundtables in 2014 and 2015 held, respectively, in Chicago and Houston.

As represented by our agreement with the Federation of University Sports of China to administer the Overseas Study Program for University Sports Leaders in China, the University of Notre Dame is proud to develop a strong program of cooperation in higher education in the area of athletics. Notre Dame will host a specialized four-week program for sports administrators, faculty and teachers, coaches and government officials in the sports education field from July 5 to July 30. Notre Dame professors and coaches will provide lectures on a wide series of topics ranging from nutrition, sports medicine, strength and conditioning, to academic services, event and game management, and media engagement. Participants will also observe sports camps and athletic training to learn how student-athletes are trained. Off-campus trips such as visits to the NCAA headquarters in Indianapolis, as well as St. Joseph High School in South Bend, a local sport club, and the Chicago and South Bend Cubs baseball games will provide first-hand exposure to the sports education, administration and culture in the Midwest region.

Athletics, while not the core educational component of a Notre Dame education, is, however, an integral part of the University’s history, tradition, community and commitment to excellence. This reflects the University’s tradition of a Catholic education that emphasizes the importance of a holistic education that is committed to educating the whole person — the intellect as well as the heart and body. An important part of educating future leaders is to nurture young people to possess a strong sense of teamwork, character and integrity, as they strive for excellence either on the playing field, in the classroom, workplace boardroom or research lab.

The University of Notre Dame is known throughout the world as the Fighting Irish, which is not just about winning matches, though this is important too. But the meaning of the “Fighting Irish” is really about the University’s passion and dedication to human solidarity and the common good. The University asks our leaders, faculty and students, “What Would you Fight For?” My answer today is that we fight for friendship and understanding between the U.S. and China, and we hope that the University of Notre Dame will serve to advance people-to-people exchange in education and athletic programs that will bring our two countries closer together in a shared dedication to education, sportsmanship and well-being.

China has a rich history of emphasizing sportsmanship in education, and China is truly a powerhouse on the world stage of sports and athletics. Over a billion people have either an American Dream or a China Dream — more people perhaps have the latter. But the combination of education and athletics can help more students realize their dreams, and more young Americans and Chinese will have opportunities to meet each other and compete in athletics, but also learn to play on the same team for human solidarity and the common good. The University of Notre Dame is proud to be part of China’s growth of athletics in higher education, and we very much look forward to learning from our partners and to our successful cooperation.