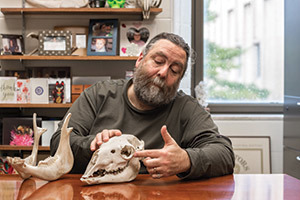 Scientists use the fossil record to make judgments on the physiology and behavior of species. But are those interpretations correct? New research from a team of researchers led by Matthew Ravosa, professor of biology and concurrent professor of both aerospace and mechanical engineering and anthropology at the University of Notre Dame, puts into question how we interpret the behavior of extinct organisms from their fossil remains, and the greater role of plasticity — or the adaptive fine-tuning of the link between anatomy and behavior — in determining evolution diversity.

Marshaling multiple datasets from his lab’s work studying the role of diet on musculoskeletal growth in the mammalian skull and oral cavity, Ravosa pointed out that such long-term plasticity experiments can uniquely inform our understanding of how an anatomical structure functions during an organism’s lifetime in the wild. This in turn greatly enriches our ability to reconstruct the behaviors and lifestyles of extinct organisms. His new study offers several key findings in this regard.

“First, we observed that food mechanical properties have a surprisingly large effect on the development and function of the feeding complex in mammals,” he said. “During postnatal growth, we show that diet-related variation in chewing stresses induces a cascade of changes at the tissue, cellular, protein and genetic levels so as to maintain the integrity of craniomandibular structures involved in food processing. Interestingly, the magnitude of such changes varies from site to site and depends on the level of analysis. Thus, only certain skull bones and measures do a good job of conveying a dietary signal in the fossil record.

“Second, apart from pointing to a considerably greater role for adaptive plasticity in morphological evolution, our research offers novel insight into the limitations of functional interpretations of fossils. Because the palaeontological record largely consists of skeletal remains, we show that failure to account for disparities in the responses of hard versus soft tissues may also result in incorrect characterizations of adaptive changes in extinct mammals.”

“Third, given the long-term nature of our experiments, we are able to demonstrate that an early postnatal onset and protracted duration of a diet-related loading pattern can result in levels of variation in the jaws of a single species on par with that observed between species. Indeed, marked variation in jaw form and function can characterize adult conspecifics that differ solely in age, which greatly complicates palaeontological interpretations of feeding behavior.

“To impart a more naturalistic perspective to our lab-based plasticity studies, we recently modeled seasonal variation in food mechanical properties and altered loading in growing mammals. To track the influence of simulated ‘seasonal’ shifts in diet on plasticity responses in the oral cavity, we performed biweekly imaging of bone formation from weaning through adulthood. These longitudinal analyses show that the morphological effects of dietary ‘seasonality’ is detected at only some cranial sites, which further hinders our ability to accurately reconstruct the biology of fossil organisms represented by fragmentary and singular specimens.”

Surprising as it may seem, the analysis Ravosa is performing on evolutionary processes can offer insights into conditions besetting us today, such as joint disease.

“Our experiments track connective tissue responses in animal models that exhibit similar feeding behaviors and patterns of bone growth as humans,” Ravosa said. “The long-term nature of this experimental research also informs us about postnatal bone formation, which is remarkably pronounced and quite variable between skeletal sites. Due to a focus on joint hard and soft tissues, we have been able to detail the coordinated responses of bone and cartilage subjected to altered stresses, much as occurs during an organism’s lifetime. This long-term, integrative perspective allows us to gain considerable insight into the onset and progression of joint diseases, implicating specific tissues and patterns of protein expression during aging.”

The study appears in the journal Biological Reviews and can be found here: http://onlinelibrary.wiley.com/enhanced/doi/10.1111/brv.12199/.