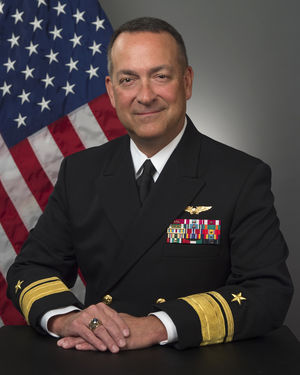 In recognition of his decades of leadership in the United States Navy, Rear Adm. Mathias Winter, class of 1984, is being presented with the Rev. William Corby, C.S.C., Award, which honors a Notre Dame graduate who has distinguished himself or herself in military service. The award is named for Notre Dame’s third president, who served as the chaplain of the Irish Brigade during the Civil War.

“As a career Naval Officer and proud class of 1984 Irish alum, I am honored to receive this year’s Rev. William Corby Award,” Winter said. “My time at Notre Dame provided me the moral, ethical and spiritual foundation to succeed in my naval career.”

Winter graduated from the University with a B.S. in mechanical engineering. He received his commission through the Navy ROTC program and was designated a naval flight officer in 1985. Winter served operational tours as a bombardier and navigator, making multiple deployments on several aircraft carriers. He has held many leadership positions with the Navy, including as commander of the Naval Air Warfare Center Weapons Division, as assistant commander for Test and Evaluation for Naval Air Systems Command, and as program executive officer for Unmanned Aviation and Strike Weapons.

In December 2014, Winter was named the chief of Naval Research, as well as the director for Innovation Technology Requirements and Test and Evaluation.

“Our Lady’s University continues to successfully generate the next generation of our military and civilian leaders essential to ensuring a brighter America aligned in strong moral and ethical values,” Winter said. “With this award, I am humbled to be recognized as part of the long history of Fighting Irish who have and continue to serve this great country of ours."

The Rev. John J. Cavanaugh, C.S.C., Award, named in honor of Notre Dame’s 14th president, honors an alumnus or alumna who has performed outstanding service in the field of government or public service. The 2015 recipient of the Cavanaugh Award is Hon. Alex M. Calabrese, class of 1975.

Calabrese, a graduate of Fordham Law School, is the presiding judge of the Red Hook Community Justice Center in Brooklyn, New York. The Red Hook Court is the first multijurisdictional court in the United States, with criminal, family and housing court jurisdiction. At the court, Calabrese administers justice by offering an array of sanctions and services, including drug, mental health and trauma-informed counseling, a GED program, education and job training programs, youth court, after-school programs and peacemaking.

“Every day throughout our country and around the world, Notre Dame graduates and students are performing acts of public service,” Calabrese said. “No one told us at school to do this, but being a student at Notre Dame taught us that helping others was part of our faith and the Notre Dame way of life.”

For his distinguished work on behalf of the Notre Dame community and those in need, Chris Stevens, class of 1974, is recognized with the 2015 Harvey G. Foster Award.

After holding leadership roles with Procter & Gamble and Anheuser-Busch, Stevens joined Keurig Inc. in 1996 and was one the original four team members who launched the Keurig Premium Coffee System, which is now the No. 1 coffee brewer in North America. Stevens oversaw the Keurig brand, sales, distribution and marketing strategies. He left Keurig in 2013 to take a position as an adjunct professor at the Mendoza College of Business. Since returning to his alma mater, he has won numerous awards for his teaching.

In addition to his teaching duties, Stevens is the founder and CEO of CS 74 Ventures LLC, a holding company of various initiatives in which he has invested/owns with the commitment of donating at least 50 percent of the profits to charitable causes. He also is a past board member of Massachusetts CRINC, the ALS Association of America, the Chicago Chamber of Commerce and the Notre Dame Monogram Club.

“On behalf of my family, thank you so much for this incredible honor. I tell my students that it is impossible to sprinkle some happiness on others and not get some on yourself,” Stevens said. “I certainly know there are many other alumni who richly deserve this honor, but I am a humbled but very happy man to receive this recognition.”