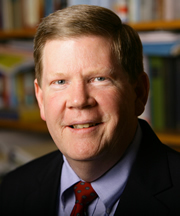 Bob Schmuhl wears some interesting hats. He is, first, the big shoulders on which the University of Notre Dames journalism program has matured, earning professional accolades from the prestigious Columbia Journalism Review as one of the nations better nontraditional programs.

A chaired scholarhe is the Annenberg-Joyce Professor of American Studies and Journalismhis interests include communications and political culture. As early as 1990, he described the cult of personality that was taking over politics with the bookStatecraft and Stagecraft: American Political Life in the Age of Personality.

But during a presidential election campaign, Schmuhl assumes another role, that ofQuote Slut,a self-assigned titled in a 1999 essayConfessions of a Quote Slutfor American Journalism Review. Schmuhl is one of those academic experts who answers the phone when journalists call seeking analysis on the days story.

He is a frequent, international flyer in these circles, regularly interviewed byMorning Irelandon RTE, occasionally contacted by journalists for the International Herald Tribune, the Kuwait Times or Journal Brazil. Come Nov. 4, he expects to pull an all-nighter giving feedback on election results. His head wont hit the pillow until he has helped RTE and Ireland sort it all out.

Schmuhls interview below follows the recent U.S. economic meltdown but preceded the presidential and vice presidential debates, an important factor in the elections outcome.

You have been outspoken in your belief that the American presidential election cycle is too long. But the period between the party nominations and Nov. 4 is relatively brief. Are length and endurance still an issue?

Absolutely. As we get near the finish line, the public is finally tuning in on a regular basis. But it is almost as though the media feel that they have already covered much of the story. Just when the citizenry needs information and perspective we get something else, including lipstick on pigs and charges about taking liberties with the truth. The media have heard the candidates speak so often that to them little is new. Yet the public is different and deserves background and perspective on each of the campaigns to get ready to vote.

You wrote in the summer issue of Notre Dame Magazine,What Abraham Lincoln considered the better angels of our natureinvariably seem to take flight when the presidency is at stake.Does that remain true in this election?

Charges and counter-charges keep flying, and truth-o-meters work overtime. The citizenry is caught in the crossfire and unable to really determine what is valid and what is not. This creates more heat than light, distracting people from the larger issues. But now we have the whole story of the state of the economy. All of a sudden very sobering reality intervenes. The current situation is so dire, were told, that it probably will result in less attention to the small and fabricated events. But let us see how the debates go.

You have maintained that the media are terribly important in elections. But it is so in a vastly different manner. Describe how.

There are so many possible sources now that you have to think beyond the traditional ones and take into account all the new ones: The blogs, talk radio,The Daily Show.All of these new forms are playing an important role in political communication today. The trouble is, many people arent as discriminating as they need to be. The partisan opinion is driving many of these messages. And people who are running the campaigns are doing everything they can to manipulate the media. It is no longer possible to pigeonhole
political communication and sequester it to the Sunday morning talk shows. Today it is as far flung as the media themselves are.

Your 1990 book examinedStatecraft vs. Stagecraft.If you wrote a new book today, what would you call it?

It might be calledStatecraft, Stagecraft and Spincraft.Since the early 1990s, the media themselves have exploded. People who are in political life are feeding them so frequently that much that we see and read and hear tends to be spun and comes with a motive and intention behind it. The continuing polarization of the public is one of the consequences of this. For example, there are those who are devoted listeners of talk radio and they dont spend much time with other sources; the same is true of blog readers, both left and right. As people gravitate toward partisan information and communication, we see the polarized politics that we now have.

You started the current, interdisciplinary journalism program about a decade ago. If you were starting from scratch today, would you do it all differently?

Today you have to prepare students for a multimedia world if they are going to work in journalism. The new technologies are critical, but I think it is appropriate to put the emphasis on reporting, writing and the ethical principles of journalism. If they are lost, where will the public turn? Will we be forced to rely on information that always comes with a point of view? I hope notfor the sake of the people and of American democracy.