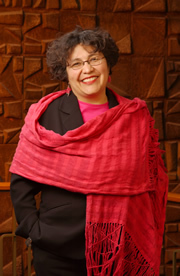 Sylvia Puente, director of the Center for Metropolitan Chicago Initiatives (CMCI) in the University of Notre Dames Institute for Latino Studies (ILS), recently returned from a two-week trip to Spain as part of the U.S./Spain Exchange Project on Muslim Integration, funded by the U.S. Department of State and the U.S. Embassy in Madrid.

In June, 13 Spanish professionals from the fields of immigrant support services, education, government and journalism visited government offices, schools and religious institutions in Amherst and Boston, Mass.; New York City; Washington D.C.; and Chicago, where Puente spoke to the group about immigrant integration of the Mexican community in the Chicago area.She, consequently, was nominated to participate in the program by the Spanish delegates.

Puente recently co-authoredForging the Tools for Unity: A Report on Metro Chicagos Mayors Roundtables on Latino Integration,following discussions held earlier this year to promote conversation among Latinos and civic, community, faith and municipal leaders.She considers her trip to Spain an intensive learning experience during which she met with government officials and local Muslim leaders and was able to identify parallels between the stories of Moroccan Muslims in Spain and those of Mexican immigrants in the U.S.

Although immigration is a fairly new phenomenon in Spain, in many ways they are ahead of the U.S., as there is public policy at each level of government which requires the development of immigrant integration plans,Puente said.And the Spanish public understands that immigrants are a necessary component to sustain Spains economy.

Puente, named in 2005 among Hispanic Business Magazines100 Most Influential Hispanicsin the U.S., has spent her career conducting community research and analyzing public policy in an effort to build strong Latino communities.While at the ILS, she has served as a catalyst for sparking a regional dialogue on the impact of Latino growth in the Chicago metropolitan area and directed a seminal study,Bordering the Mainstream,on the needs of the Latino population in Berwyn and Cicero, Ill.

Before joining the ILS, Puente served as new community initiatives director for The Resurrection Project, an organization that promotes healthy communities through education and community development in Chicago.Puente also served for eight years as director of research, public policy and advocacy for the Latino Institute of Chicago, which strives to develop links between Latino communities.

In 2003, Puente was one of 25 Chicago-area women named a Pioneer for Social Justice.She earned her masters degree in public policy studies from the University of Chicago.

The exchange was facilitated by the Institute for Training and Development in Amherst, and the Córdoba English Teachers Association.