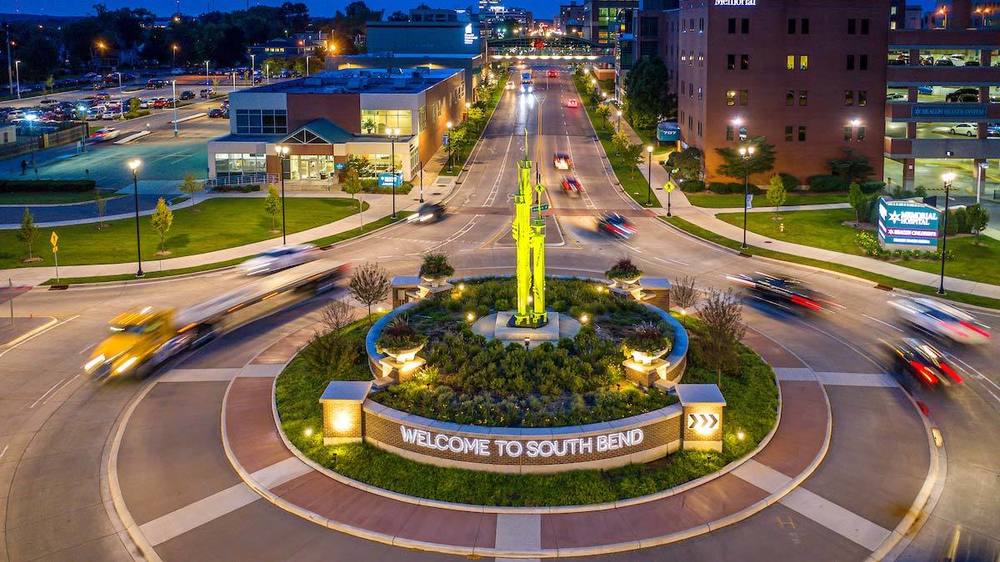 Six sculptures by University of Notre Dame professor Rev. Austin Collins, C.S.C., have been installed in roundabouts in South Bend as part of a pilot aimed at adding color and vibrancy to the city and sparking conversation around public art.

The new and existing works, rising from massive concrete bases at the centers of the roundabouts, can be viewed along Michigan Street at Bartlett and Marion streets on the north side and at Chippewa Avenue on the south side.

Installed by the city of South Bend with support from the Community Foundation of St. Joseph County, the sculptures — “Fern Temple VI” (Bartlett), the four-part series “Wedding Cakes” (Marion) and “Temple Carousel” (Chippewa) — will remain on display for a minimum of one year to test the scale of public art in the roundabouts.

“Fern Temple VI” was specially fabricated for the pilot with assistance from Michael McLoughlin, president of K&M Machine-Fabricating of Cassopolis, Michigan, which specializes in large machined parts and fabrications, including sculpture. 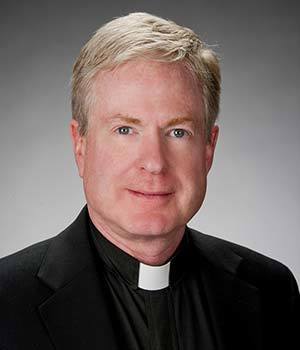 The three-piece sculpture, influenced by ecological issues as well as the shift toward innovation and technology as engines of thought and growth in South Bend, is part of a series that includes “Fern Temple IV,” a similar work on display at the Charles B. Hayes Family Sculpture Park at Notre Dame.

Along with “Wedding Cakes” — a monumental reflection on the iconic wedding cake in four parts — “Fern Temple VI” is on loan to the city and will return to Father Collins when the pilot ends. The city owns “Temple Carousel,” which was previously displayed at South Bend International Airport. It was influenced by Father Collins’ visit to Haiti.

“We are grateful to have a renowned artist like Father Collins in our community and appreciate his loan of sculptures to the city of South Bend,” said Jitin Kain, interim executive director of community investment for the city. “The sculptures celebrate two prominent entrances into the city and help ignite a conversation on the value of public art in our community.”

Pending the outcome of the pilot, the city hopes to launch a permanent, rotating exhibit of public sculpture in the roundabouts as a way to improve quality of life and place in the city and spark conversation around public art.

To that end, the pilot performs two functions, Father Collins said. It adds color and vibrancy to the roundabouts, and it promotes “intellectual dialogue about the environment, about the architecture and about the design of the city.”

Father Collins is a professor of sculpture and the religious superior of Holy Cross priests and brothers at Notre Dame. He specializes in public art, large outdoor sculpture, installation art and liturgical art. His work has been featured in more than 100 exhibitions around the country. It can be found in 65 private and public collections as well.

The city selected Father Collins for the pilot based on his experience with large, outdoor sculpture and in consultation with the South Bend Museum of Art and local art experts.

“South Bend’s my community, too, so it was an honor to give back to the city and continue the strong relationship between South Bend and Notre Dame,” Father Collins said.

The city installed the roundabouts in 2016 as part of a project to convert Main and Michigan streets — a former one-way couplet from Marion to Chippewa — from one-way to two-way traffic to improve safety and stimulate investment downtown.

Taking a cue from places such as Carmel, Indiana, home to more than 125 roundabouts, the city designed the roundabouts to include lighting and central bases with future public sculpture in mind.

“The city was well-planned for these (sculptures),” Father Collins said, “and that’s a testament to the city administration.”

He said the response to the sculptures — particularly among friends and fellow artists — has been positive, though he welcomes criticism as well.

“That’s what’s healthy about public art dialogue. You have to walk into a gallery to look at art, (but) this is like architecture,” he said. “It’s out in the public domain, and you have every right to speak about it and criticize it or praise it.”