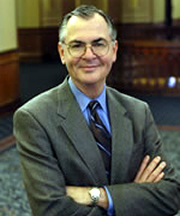 Nathan O. Hatch, provost of the University of Notre Dame since 1996, will become the president of Wake Forest University in Winston-Salem, N.C., on July 1. His election by the Wake Forest board of trustees was announced this afternoon by Murray C. Greason Jr., chair of the board and chair of the Presidential Search Committee.

Hatch, 58, the Andrew V. Tackes Professor of History, is the third person to serve as Notre Dames provost since the position was established in 1970. The provost is the Universitys second ranking officer and, at the direction of the president, exercises overall responsibility for the academic enterprise.He had been elected the Universitys vice president for graduate studies and research in 1989 and joined the faculty in 1975.

The president consults with the elected faculty members of the Academic Council concerning all serious candidates and then reports the results of the consultation to the Trustees, along with a personal recommendation.The Trustees elect the new provost.Notre Dames president, Rev. Edward A. Malloy, C.S.C. said the president-elect, Rev. John I. Jenkins, C.S.C., who will take office on July 1, will chair this committee.

“It has been an immense pleasure and privilege to work with so many colleagues at Notre Dame to advance this university as a superb Catholic center of learning,” Hatch said. "I take great pleasure that today Notre Dame is stronger both in research and teaching, in diversity and Catholic mission, in arts and sciences and in the professional schools.

“I have been privileged to work with so many talented faculty, academic leaders, and committed administrators across the University.In coming months, there is still much to accomplish to strengthen academic life at Notre Dame and to prepare for the important transition to President-elect John Jenkins.”

Hatch, who would have completed a second five-year term as provost in 2006, said, “This is a wrenching decision given the deep ties and great affection that we share for so many friends and colleagues here. We are grateful for the support we have received over the years. We have had a great life at a marvelous institution.We love Notre Dame and our belief in Notre Dame’s critical mission could not be stronger.”

In making the announcement at Wake Forest, Greason said, “It was clear from the moment we identified him as a prospective candidate that Dr. Hatch did not simply possess the qualities and experience we were seeking, but that he is a genuine role model of the teacher-scholar, a highly valued ideal at Wake Forest.”

During his tenure as provost, Hatch focused on three areas: the pursuit of outstanding faculty; the revitalization of undergraduate education, including the creation of the Kaneb Center for Teaching and Learning and new opportunities in off-campus and international studies; and the enhancement of academic centers of excellence, including the Keough Institute for Irish Studies, the Institute for Latino Studies, the Keck Center for Transgene Research, and the Center for Nanoscience and Technology.

He made a large number of major academic appointments, including the deans of engineering, arts and letters, the Mendoza College of Business, science, the Law School, and architecture, the director of libraries, and the assistant provost for enrollment. In addition, he has played an integral role in enhancing Catholic intellectual life at Notre Dame through the establishment of the Erasmus Institute, a major center for scholarship informed by Catholic thought.

Father Malloy, Notre Dames president, said, “It has been my pleasure to work with Nathan for many years, first in his capacity as vice president of graduate studies and research and, more recently as provost.During this time he has become a trusted and good friend.Nathan is a person of deep faith and strong academic achievement.I have come to admire his integrity and high moral standards, his skill as an articulate spokesperson for the University, his capacity for building consensus, and his ability to create a productive and supportive work environment.He and his wonderful wife, Julie, have been a great gift to Notre Dame.I join all of their colleagues and friends here in wishing them well as they take on new challenges and opportunities at Wake Forest University.”

Father Jenkins, who served with Hatch for four years as an associate provost, said, “Notre Dame owes a tremendous debt of gratitude to Nathan for years of truly distinguished service to the University.He is a scholar of the first rank, who, as an administrator, has consistently shown a commitment to excellence and an ability to identify and attract outstanding scholars and academic leaders. He has tirelessly fostered the University’s distinctive Catholic identity, and under his leadership Notre Dame has made remarkable progress.”

Father Jenkins added, “I am personally grateful to Nathan, for he first hired me in an administrative post and was always a wise, humane, and nurturing supervisor from whom I learned much.Along with his wife, Julie, he has been an invaluable ambassador for the University.Nathan and Julie are dear friends, and we will miss them a great deal.We wish them every success in their exciting new endeavor.”

Wake Forest, founded in 1834, is a private doctoral research university. Although it has a Baptist heritage, it has been self-governing since the 1980s. Its total enrollment for the fall of 2004 was 6,504. Thomas K. Hearn Jr. has been president since 1983 and is retiring. Hatch will be Wake Forests 13th president.

By appointment of President Clinton, Hatch is a member of the National Council on the Humanities, the 26-person advisory board for the National Endowment for the Humanities (NEH). Appointed to the Tackes Chair in 1999, Hatch regularly is cited as one of the most influential scholars in the study of the history of religion in America. His book, “The Democratization of American Christianity,” was chosen in a survey of 2,000 historians and sociologists as one of the two most important books in the study of American religion.

As vice president for graduate studies and research, Hatch instilled a vision of “small but superb” graduate programs that attracted more and better students to the University, as well as substantial new resources. He oversaw the Universitys masters degree and doctoral programs and was responsible both for the $20 million budget that supports them and for external funding of research.

Hatch served as acting dean of Notre Dames College of Arts and Letters, its largest academic unit, in 1988-89, and from 1983-88 was the colleges associate dean. Also during that time he founded and directed the Institute for Scholarship in the Liberal Arts (ISLA), which has fostered a significant increase in external funding of faculty in the humanities and social sciences.

The Hatches are the parents of three children, Gregg, a 1997 graduate of Notre Dame; David, a class of 2000 Notre Dame graduate; and daughter Beth, a sophomore at the University.