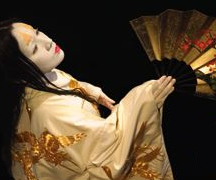 The biblical character Salomé, who demands Herod bring her the head of John the Baptist on a silver platter, was a naughty, naughty girl. Notre Dame theatre Professor Anthony Juan describes her asthe ever-changing shape, the mysterious, the moon that heightens the tide of seas and desire.

So ever-changing and mysterious is she that artists through the ages have depicted her in oil, sculpture, ballet, and even a rock video. The version of the Salomé story being produced March 28-April 8 on Notre Dames Decio Mainstage Theatre is by playwright Oscar Wilde.

But it is Juans turn to lend the play his own artistic rendering, and he will do so through elements of Kabuki, a contemporary form of Japanese dance, and Butoh, a traditional Filipino dance. A native of thePhilippines, he brings to Notre Dame both an understanding of Eastern theater and the conviction that his students need to step into other, unfamiliar worlds. Special guest actress Olga Natividad will perform the role of Salomé, who famously enchants King Herod with the Dance of the Seven Veils.

To see Natividad in street clothes, and then to see her wrapped in a kimono in full Kabuki makeup, is to get a glimpse of the challenge the cast, designers and technical staff have accepted.

But to visit Rick Donnelly in the costume shop is to be completely bowled over.

Donnellys challenges have been many. Although a theatrical costume designer for 35 years, he had never done Kabuki. Authentic Kabuki costumes demand that nobility be draped in sumptuous, embroidered kimonos. Even ordinary kimonos are made from yards of hand-painted silks.

It is Juans vision that the Kabuki costumes should be extreme. The costumes should, Donnelly explains,create a larger-than-life theatricality.The military costumes replicate traditional details but are super-sized. Shoulders are wider than traditional. Headpieces stand 3 and 4 feet tall, or cascade to the floor and beyond. Donnellys challenge was first to learn Kabuki costume traditions, then to stand them on their ear.

He started by visitingJapanin January, on a 13-day trip supported by a Boehnen Fund for Excellence in the Arts, one of the grants managed by the Institute for Scholarship in the Liberal Arts. Traveling toOsakaandKyoto, Donnelly visited Kabuki and Noh theaters, museums, fabric shops and even a puppet show. The scale of the production fell into place when he collaborated with Juan upon his return.

One steep challenge was managing to create this unique world, including naturally expensive items such as imported kimonos and silks, with a $5,000 budget. The answer: Its amazing what Donnelly can find at Hobby Lobby, Meijer and Pier 1 Imports.

His thriftiness is revealed in the armor he created for one guard. From a distance, it looks as though its made from metal feathers; up close, the feathers are revealed to be black plastic spoons with hand-painted gold borders. A bicycle tire painted red is fashioned as armor. And while a custom-made kimono will give student actor Luke Cieslewicza a noble presence worthy of his character, Herod, his lower body armor is made from a Meijer placemat. Pier 1 may have sold out of rattan blinds, which Donnelly adapted as guard uniforms. And Michianas inventory of Star Wars helmets has been depleted and customized with antlers or flame-colored sword handles.

Students will have to adjust to the weight and awkward lean of head dressing made of bicycle helmets, on which Donnelly has mounted turbans, obelisks, great rattan fans, or cascading window shades. These tricks are what three-plus decades of experience are worth.You get from A (the design) to Z (the inexpensive execution) pretty quickly,he says.

He may most be looking forward to the costume Salomé will wear in her Dance of the Seven Veils, made of eight layers of varying colored silk chiffon. True to Kabuki tradition, aspects of her true nature are revealed as elements of her costume are pulled away.

Saloméis said to examine the power of suppressed desire. And by the time seven layers of the costume have been danced away, the audience may well get the point.