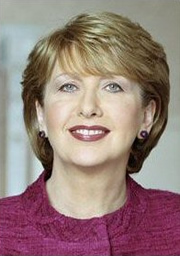 President ofIreland, Mary McAleese, will be the principal speaker and the recipient of an honorary doctor of laws degree at the University of Notre Dames 161 th Commencement exercises May 21 (Sunday). The ceremony will begin at2 p.m.in theJoyceCenterarena on campus.

As an attorney, journalist, scholar and now president, Mary McAleese is an inspiring role model for women, a fierce champion for peace, and a passionate voice within the Catholic Church,said Rev. John I. Jenkins, C.S.C., Notre Dames president.The theme of her presidency is building bridges,and she has done just that, while also staying true to herself. We are honored that she has accepted our invitation to speak to the Class of 2006 and receive an honorary degree from Notre Dame.

Mrs. McAleese was elected president in 1997 and stood unopposed for election to a second term in 2004. A native ofBelfast, she is the countrys eighth president and the first fromNorthern Ireland.

As part of herbuilding bridgestheme, President McAleese is a regular visitor toNorthern Ireland, where she has been warmly welcomed by both the Catholic and Protestant communities, confounding critics who believed her election would lead to greater division. Among many conciliatory gestures, she officially recognizes both St. Patricks Day and the Twelfth of July, the anniversary of the Protestant victory in the 1690Battleof theBoyne.

The eldest of nine children, President McAleese was raised in a Catholic family in a mainly Protestant area ofBelfast. DuringThe Troubles,her family was forced to leave its home, settling inCountyDown. She studied law at Queens University inBelfastand was graduated with honors in 1973.

After practicing law for a year, President McAleese accepted a position atDublinsTrinityCollegeas the Reid Professor of Criminal Law, Criminology and Penology, succeeding Mary Robinson, whom she later succeeded asIrelands president. She left the university to work for two years as a journalist for the Frontline and Today Tonight programs on RTÉ, the national television network ofIreland. She continued to work part time with RTÉ after returning to Trinity in 1981.

President McAleese served as a member of the Catholic Church Episcopal Delegation to the New Ireland Forum in 1984 and the Churchs delegation to the North Commission on Contentious Parades in 1996. She also was a delegate to the 1995 White House Conference on Trade and Investment inIrelandand to a follow-up conference a year later inPittsburgh.

President McAleese is married to Dr. Martin McAleese, who in 2004 received an honorary degree from Notre Dame during the dedication ofDublins historic OConnell House as the new base for the Universitys programs inIreland.