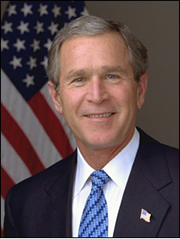 President Bush will visit the University of Notre Dame for the second time in his presidency and fifth overall on Friday (March 4) at4:45 p.m.in theJoyceCenterarena.Attendance is by ticket only. The White House has distributed tickets through local organizations.

The president last spoke at Notre Dame onMay 20, 2001, when he served as the principal speaker and received an honorary doctor of laws degree at the Universitys 156 th Commencement exercises.

In what was then his most forceful message on faith-based initiatives, the president said,Government should never fund the teaching of faith, but it should support the good works of the faithful.

Prior to his Commencement address, President Bush had visited Notre Dame on three previous occasions, twice for football games and, most notably, onMarch 7, 1980, when he spoke on behalf of his fathers presidential candidacy at the Universitys Mock Republican Convention. The elder Bush won the Notre Dame vote but lost the national nomination to Ronald Reagan, for whom he served for eight years as vice president.

Other presidential visits to campus include the elder Bush serving as Commencement speaker in 1992, following in a long tradition ofU.S.presidents addressing Notre Dame graduates. Ronald Reagan spoke at the 1981 Commencement, following Jimmy Carter in 1977 and Dwight Eisenhower in 1960. President Reagan also spoke in 1988 when aU.S.postage stamp honoring Knute Rockne was unveiled on campus. Reagan portrayed legendary Notre Dame running back George Gipp in the motion pictureKnute Rockne, All American.

Gerald Ford in 1975 and Franklin Roosevelt in 1935 received Notre Dame honorary degrees at special academic convocations. President Kennedy received the Laetare Medal, Notre Dames highest honor, in a White House ceremony in 1961, but he never visited the campus during his presidency.