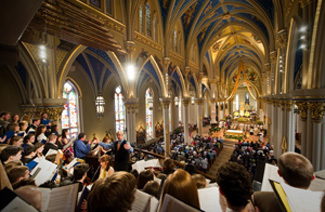 The first Sunday of Advent is the first day of the Catholic liturgical calendar, which this year falls on Nov. 27. Throughout the English-speaking world, that Sunday Mass will begin, as usual, with the sign of the cross, and the priest’s customary greeting to his fellow worshipers, “the Lord be with you.” And then, not as usual, the congregation will be expected to reply, “and with your spirit.”

That change of liturgical wording is only one of several in the third edition of the Roman Missal, whose new translations from the ancient Latin texts will, from this Advent on, be in standard use for all Masses in English.

Among those Catholics who are aware of the forthcoming changes, anticipations vary widely. “Some are expecting this to usher in the beatific vision,” says Notre Dame theologian Rev. Michael Driscoll, “while others think it will unleash Armageddon.”

A scholar of liturgy and sacramental theology, Father Driscoll also is president of the Catholic Academy of Liturgy and a liturgical advisor to the American Catholic bishops. He is co-author, with Michael Joncas, of “The Order of Mass: A Roman Missal Study Edition and Workbook” (Liturgy Training Publications), a new reference and resource guide for priests and liturgists, and for the last few months, he has discussed the new translations in lectures and seminars at Notre Dame and nationwide, usually under the provocative title “Missal Alert.”

Much of what Father Driscoll has to say concerns the last half century of Catholic liturgical history, beginning with the Second Vatican Council’s replacement of Latin with vernacular Mass prayers and the English-speaking bishops’ subsequent establishment of the International Commission on English in the Liturgy (ICEL). With the approval of bishops from ten English-speaking countries, ICEL translators at first employed a method of “dynamic equivalence,” seeking to render the sense and meaning of the original Latin texts in idiomatic English. But new instructions for liturgical translation issued by the Vatican in 2001 required a method of “formal equivalence,” rendering the original texts far more exactly “and without paraphrases or glosses.” 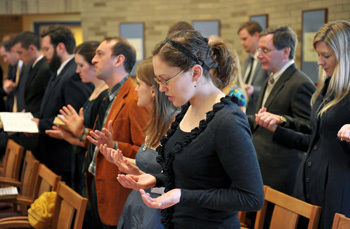 Rarefied as this controversy may seem, it has roots in the ancient Christian principle of “lex orandi, lex credenda,” which could be translated (with a bit more dynamic license than formal precision) as “what we pray is what we believe.” So both critics and advocates of the changes should be forgiven their occasional vehemence.

Whatever else they may think of it, Notre Dame’s liturgical scholars seem generally to agree that the introduction of the new missal translation is an occasion to look afresh, marvel anew and so enter more deeply into what we are doing when we are going to Mass. Theologian David W. Fagerberg, whose essay on the translation appears in this month’s Ligourian Magazine says that “between the moment we find the words startling, and the moment when the new words become familiar, we can pay new attention to the words of our liturgy. They will be fresh, and we should take advantage of the situation."

Other Notre Dame scholars preparing the way for the new translation include Margot Fassler, Keough-Hesburgh Professor of Music History and Liturgy and co-director of the Notre Dame’s Master of Sacred Music program, who has produced a video introducing the changes. (Watch video here.)

In addition, the Notre Dame Center for Liturgy has made available a series of streaming videos recorded by liturgical scholars to assist schools, parishes, and university communities in their preparation for the liturgical changes. (Watch videos here.)