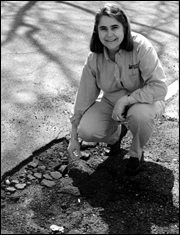 Potholes are a nuisance this time of year. Even civil engineer Theresa Harrison finds them irritating as she drives to her office inSouth Bendor her classes in DeBartolo Hall.Sometimes I think Im more frustrated than others. I know what causes and how to avoid or fix a pothole, but I cant just jump out of my car and do it,she says.

Instead she focuses on designing pothole-resistant roads and educating future engineers who might someday solve the pothole problem altogether. As an engineer at Lawson-Fisher Associates, one of her current projects is to widenDouglas RoadbetweenMain StreetandFir Road.

This isHarrisons first venture into teaching, and a beneficial one for theCollegeofEngineeringand its students. As vice president of the Indiana Section of the American Society of Civil Engineers, she brought the groups annual meeting to campus last month.

About 200 engineers from around the state attended, and 14 speakers came from in-state and around the country. Topics ranged from storm water quality to the World Trade Center collapse. Members of the student chapter assisted with the planning.

And yes, the engineers discussed potholes.

One proposed solution was rubber roads: asphalt containing ground-up tires. Conventional asphalt is a combination of oil, rock and sand. It can expand and crack when moisture gets in, which is something rubberized asphalt supposedly prevents.

Harrisonis skeptical.No matter how flexible the surface is, if you get water under the road that cannot drain eventually the road will fail.

In the meantime,Harrisonfeels the best solution is to avoid the cause of potholes in the first place by building roads with good drainage. If the base under the pavement is controlled to drain water away, potholes are reduced, she says.

Have you ever noticed that on roads aroundLake Michiganwhere there are sand dunes, there are few potholes? The sand is probably 50 feet deep, and sand drains better. But some places, you might have a little streak of clay, trapping water, keeping it from draining, and that causes havoc on the road.

The problem is worse on older roads.

Maybe the road was good at first, but you cant control what is put in later and how it is put in that will block the drainage.Repeated freezing and thawing, like we had this winter, encourages potholes. A sustained freeze keeps them from developing as rapidly.

Like all of us this time of year,Harrisons travels take her past pothole repair crews. She notes that while we dont yet succeed in preventing them, our techniques for fixing them are becoming ever more sophisticated. The City ofSouth Bend, for example, now owns automated patchers that can fix up to 100 holes a day.