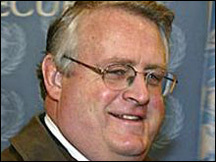 Williamson also served previously in senior foreign policy positions under Presidents Reagan and George H.W. Bush, including as assistant secretary of state for international organizations and assistant to the president for intergovernmental affairs in the White House. He also has served as chairman of the Illinois Republican Party.

Williamson is active in a wide variety of civic organizations, serving on the board of directors of the International Republican Institute; the board of the Committee in Support of Russian Civil Society; a member of the advisory committee for the International Human Rights Center, DePaul University; and a member of the Council on Foreign Relations.