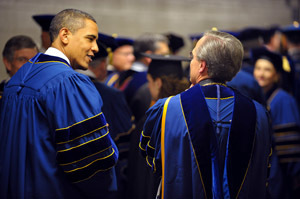 Two presidents, one of the University of Notre Dame, one of the United States, addressed the importance of dialogue on difficult issues before the appreciative and enthusiastic participants of the 164th Commencement Sunday (May 17) in the Joyce Center Arena.

Obama’s visit, in the face of discord about his position on abortion, placed the University under a barrage of criticism and protest. Both he and University President Rev. John I. Jenkins, C.S.C., addressed the discord as a teachable moment.

Father Jenkins quoted Popes Benedict and John Paul II on the importance of universities—Catholic universities, according to Pope John Paul II, to be a place “for a fruitful dialogue between the Gospel and culture.”

“More than any problem in the arts or sciences—engineering or medicine—easing the hateful divisions between human beings is the supreme challenge of this age,” Father Jenkins said. “If we can solve this problem, we have a chance to come together and solve all the others.”

“Difference must be acknowledged, and in some cases even cherished,” Father Jenkins said. But in the service of the Church, “we can persuade believers by appeal to both faith and reason. As we serve our country, we will be motivated by faith, but we cannot appeal only to faith. We must also engage in a dialogue that appeals to reason that all can accept.

“As a Catholic university, we are part of the Church—members of the ‘mystical body of Christ,’ animated by faith in the Gospel. Yet we are also—most of us—citizens of the United States—this extraordinary evolving expression of human freedom. We are called to serve each community of which we’re a part, and this call is captured in the motto over the door of the east nave of the Basilica: ‘God, Country, Notre Dame.’”

Father Jenkins was interrupted for applause when he noted, “Most of the debate has centered on Notre Dame’s decision to invite and honor the President. Less attention has been focused on the President’s decision to accept,” he said. “President Obama has come to Notre Dame, though he knows well that we are fully supportive of Church teaching on the sanctity of human life, and we oppose his policies on abortion and embryonic stem cell research.” 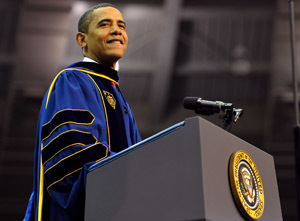 “Father Hesburgh has long spoken of this institution as both a lighthouse and a crossroads,” Obama said. “The lighthouse that stands apart, shining with the wisdom of the Catholic tradition, while the crossroads is where ‘…differences of culture and religion and conviction can co-exist with friendship, civility, hospitality, and especially love.’”

While his stance on abortion was likely unacceptable to some, he said he aims to a dialogue of “fair minded words.”

“When we open our hearts and our minds to those who may not think precisely like we do or believe precisely what we believe—that’s when we discover at least the possibility of common ground,” Obama said.

Frequently interrupted by applause, he continued: “So let’s work together to reduce the number of women seeking abortions by reducing unintended pregnancies, and making adoption more available, and providing care and support for women who do carry their child to term.

“Let’s honor the conscience of those who disagree with abortion, and draft a sensible conscience clause, and make sure that all of our health care policies are grounded not only in sound science but also in clear ethics as well as respect for the quality of life.”

At least three times, Obama’s speech was disrupted when individuals in the crowd began shouting anti-Obama statements. At one point, annoyed by the interruption, the arena’s members shouted down the protest by chanting “We are ND. We are ND.”

The impact that the protests have had on the graduates was acknowledged by Obama, who remarked “how inspired I am by the maturity and responsibility with which this class has approached the debate surrounding today’s ceremony.” That moment briefly stopped the ceremony as parents, guests and members of the Commencement platform rose to give graduating students a standing ovation.

E. Brennan Bollman, a St. Joseph, Mich., native who is headed for medical school at Harvard University, represented the class as valedictorian. She echoed another point made by Obama, that today’s graduates face challenging times. “We will spend much of our lives in an acutely suffering world,” predicted Bollman, who has volunteered among the ill in venues including Haiti. 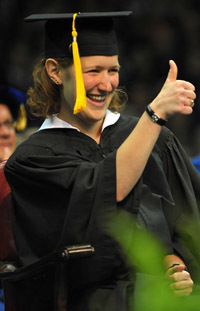 “So let’s be different,” Bollman recommended.

Bollman’s speech was received with enthusiasm. For an audience overflowing with enthusiasm, Bollman received an unprecedented honor as the first valedictorian to receive a standing ovation before she had even begun to speak.

A more somber “first” went to Judge John Noonan, who stepped in to make Laetare remarks when Mary Ann Glendon, Learned Hand Professor of Law at Harvard University and former U.S. ambassador to the Vatican, declined the 2009 Laetare Medal. “Debate is not now about to close,” on the subject of abortion, he said. “At its center are the claims of conflicting consciences.”

Noonan was applauded when he recognized Glendon’s absence. “One friend is not here today, whose absence I regret,” he said. “I respect her decision. At the same time, I am here to confirm that all consciences are not the same; that we can recognize great goodness in our nation’s president without defending all of his multitudinous decisions; and that we can rejoice on this wholly happy occasion,” he said.

The ceremony ended 30 minutes later than a typical year, and not before Provost Tom Burish twice brought the audience to a standing ovation in appreciation of the leadership Father Jenkins showed in inviting President Obama.

Obama received an honorary doctor of laws. In absentia, Myles Brand, former Indiana University president and head of the National Collegiate Athletic Association, whose battle against cancer required him to remain home.

Dr. Steven C. Beering, Doctor of Laws, the former president of Purdue University and now chair of the National Science Board

Don Michael Randel, Doctor of Laws, the former president of the University of Chicago and current president of the Andrew W. Mellon foundation. As speaker at Saturday’s Graduate School Commencement, Randel saw the conferring of more than 160 doctoral degrees and more than 400 master’s degrees.

Patrick John Finneran Jr., Doctor of Engineering, a member of the Executive Education Advisory Council at the Mendoza College of Business

A standing ovation also was offered to Cindy K. Parseghian, recipient of a Doctor of Science, “who has transformed personal tragedy into a passionate commitment to find a cure for Niemann-Pick Type C. disease, raising $33 million with her husband, Michael.” The rare and fatal genetic disorder has taken the lives of three of her four children.