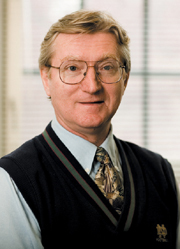 Wolfgang Porod, Frank M. Freimann Professor of Electrical Engineering and director of the Center for Nano Science and Technology at the University of Notre Dame, has been named a Han Fischer Senior Fellow by the Institute for Advanced Study (IAS) at the Technische Universität München (TUM).

Researchers in the IAS-TUM oversee projects from engineering, science and the humanities. Fellowships are awarded based on the academic record of the honorees with regard to innovation and the promise of major academic or technological breakthrough. The Hans Fischer Senior Fellowship is named in honor of the TUM professor, who was awarded the 1930 Nobel Prize in chemistry for his pioneering efforts in hemoglobin.

Porod, like other senior fellows, is expected to pursue research activities consistent with the institution’s motto “High Risk, High Reward,” as the IAS is concerned with impact on advanced research fields in the long run, supporting top-level research without the burden of bureaucratic requirements. An expert in the area of nanoelectronics and quantum devices, he will continue to exploit new physical phenomena at the nanoscale for novel information processing devices and systems during his tenure at IAS.

A faculty member since 1986, Porod is the co-inventor of the Quantum-dot-Cellular Automata (QCA), a transistorless approach to computing. His research focuses on solid-state physics and its application to electronics; device reliability, degradation and breakdown; quantum devices and architectures for nanoelectronics; and the limits imposed by the laws of physics on computation.

Porod is a fellow of the Institute of Electrical and Electronics Engineers (IEEE) and the American Association for the Advancement of Science and has authored more than 300 publications and presentations. He serves on the advisory and program committees of several international conferences and is a reviewer of proposals to the National Science Foundation, NASA and several technical journals. In addition, he is active in several professional societies and serves as a speaker in IEEE Distinguished Lecturer programs.

Porod earned master’s and doctoral degrees in theoretical physics from the Universität Graz (Austria). Prior to joining the Notre Dame faculty, he served as senior research analyst for the Center for Solid State Electronics Research at Arizona State University.

The IAS program promotes top-level research in the Excellence Initiative by the German federal and state governments. Fellows receive a stipend, an additional budget for research expenses and support for two doctoral students for three years.