The bells at the University of Notre Dame’s Basilica of the Sacred Heart rang in celebration this afternoon (March 13) as white smoke appeared from the chimney on the roof of the Sistine Chapel in Vatican City, signaling that a new pope had been chosen. 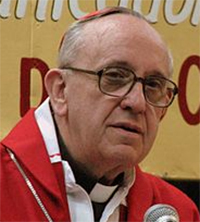 Rev. John I. Jenkins, C.S.C., Notre Dame’s president, offered his prayers for newly elected Pope Francis. Cardinal Jorge Mario Bergoglio was elected by the College of Cardinals today in Rome as the 266th pontiff of the Catholic Church.

“We at Notre Dame join the Church in rejoicing in the election of Pope Francis, the first pontiff from the Americas,” Father Jenkins said. “He is known as a humble and holy servant of the Church whose simple life and concern for the poor make his choice of the name Francis particularly appropriate. We pray for Pope Francis as he begins his pontificate.”

Notre Dame will celebrate a special Mass for Pope Francis at 11:30 a.m. Thursday in the Basilica.