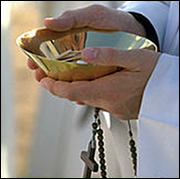 The Rosary will be recited at 4:30 p.m. in the Lady Chapel of the Basilica of the Sacred Heart at the University of Notre Dame every day until the burial of Pope John Paul II on Friday (April 8).

A Book of Remembrance for the Holy Father will be placed in front of the Basilica pulpit for all who wish to inscribe their names to symbolize their prayers for the pope.

Black bunting will be hung around the Basilica doors and will remain in place until the election of Pope John Pauls successor.A portrait of Pope John Paul has been placed in the Basilica sanctuary, along with a zucchetto, or white skull cap, worn by him and a crucifix which were given by the late pope as gifts to Rev. Theodore M. Hesburgh, C.S.C., Notre Dames president emeritus.