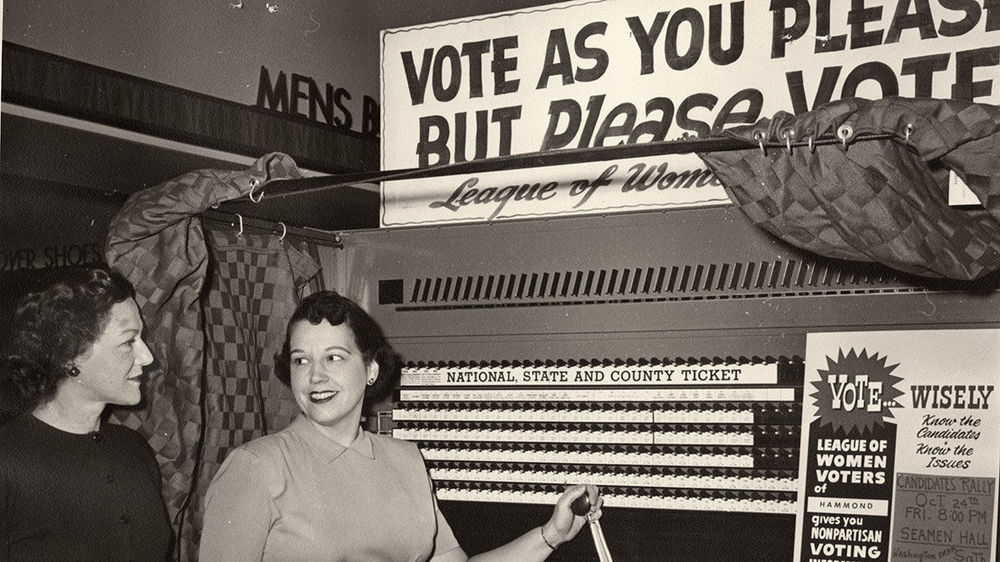 In new research fittingly published in the year marking the 100th anniversary of women’s right to vote in the U.S., two political scientists trace the evolution of women’s voting behavior, turnout and candidate choice.

“A Century of Votes for Women: American Elections Since Suffrage,” from University of Notre Dame Professor of Political Science Christina Wolbrecht and her co-author J. Kevin Corder, professor of political science at Western Michigan University, is the only complete source of information on how women have voted since suffrage through the present day. The professors’ research dispels the illusion of the homogenous “woman voter,” showing how changing political, social and economic realities swayed votes and how assumptions about women as voters influenced politicians, the press and scholars.

“In the 100 years since women got the vote, the turnout gap has reversed and women have been more likely than men to vote since 1980,” said Wolbrecht.

The professors track important factors that affect voter turnout among women, including race, marriage and education, and how those have changed over time. Despite the passage of the 19th Amendment, Jim Crow practices prevented the vast majority of black women from voting until the middle of the 20th century. Wolbrecht and Corder report that today, more than 50 years after the passage of the 1965 Voting Rights Act, black women turn out to vote at rates that are not only higher than black men, but indistinguishable from non‐Hispanic white men.

“Women’s votes are powerful and sought after, and politicians’ efforts to appeal to women voters have helped highlight issues like equal pay and universal health care. However, the most important thing to take away from our research is that women voters — just like men voters — are not a uniform bloc. Different women have different identities and interests that shape their political engagement and choice of candidates,” Wolbrecht said. For example, it was African American women’s votes that ousted Roy Moore in the contentious 2017 Senate race in Alabama and white working-class women who helped boost Donald Trump into the White House in 2016.

In the early 21st century, education increases women’s and men’s likelihood of voting equally and, notably, American women are earning bachelor’s degrees more often than men — as of 2014, at a rate of 37 percent versus men’s 29 percent, helping to explain the higher rates of turnout among women compared to men overall. Educational attainment has become an increasingly important marker of political preferences for white women in particular, with college-educated white women preferring Democratic candidates, and non-college-educated white women preferring the GOP. Black women, regardless of education, are among the most loyal Democratic voters.

As the growing numbers of women college graduates suggest, women’s lives have undergone dramatic changes since the ratification of the 19th Amendment, including shifts in marriage and women working outside the home. These shifts in women’s experiences shape their political engagement in sometimes surprising ways. Unlike education, marriage seems to have a bigger impact on men’s political engagement than women’s.

“The social and political benefits of marriage appear to provide a slightly greater turnout boost for men (7 percent) than for women (4 percent),” the authors write. “This is somewhat remarkable given that only 50 years prior, social scientists fully expected men to lead household engagement with politics and voting; today, women are less dependent on a household partner to engage them in politics than men.”

The researchers identified that one of the most consistent themes since 1920 “has been that women’s interests are fundamentally tied to motherhood and the home. ... It is not, however, the only or even the most important factor that shapes political choices of women.” This so-called “momism” has serious costs for the representation of women’s interests, Wolbrecht and Corder emphasize. The recent talk of soccer moms, for example, focuses candidates’ attention on just one kind of woman voter. However, they write, “the idea that women voters should be framed as white, married and with children has become only less accurate over time.”

The 2016 campaign season and election “highlighted sex and gender in ways few could have predicted,” the authors note. The scrutiny was intense with then-candidate Donald Trump attacking women’s looks and commenting negatively on female biological functions. Some media outlets resorted to fallacious stereotypes of strong women, calling Hillary Clinton shrill and unlikeable. Interestingly, however, the 11-point gender gap was not much changed from recent presidential elections, with Trump receiving 53 percent of men’s votes, but only 42 percent of women’s.

Here again, the authors highlight the diversity of women voters: While 52 percent of white women voted for Trump in 2016, a full 94 percent of black women cast ballots for the Democratic nominee.

As the U.S. commemorates the centennial of the 19th Amendment, the authors underscore that women’s electoral behavior must be understood in the unique context of the particular time in history.

“Women are not a cohesive voting bloc,” the authors write. “While we cannot predict with certainty what women voters will do next, we expect that reality to remain intact.”

Wolbrecht will be participating in nationwide events celebrating the centennial, including giving a keynote speech at the “100 Years of Women Voting” symposium at the Library of Congress and U.S. Capitol Historical Society in May. The event is part of a series of suffrage-related events coordinated by the Congress-funded Suffrage Centennial Commission. For further information on the book and appearances, visit the book page here. Director, Rooney Center for the Study of American Democracy
Professor of Political Science

On the front lines of the coronavirus fight, health professionals show ‘compassion to its fullest’