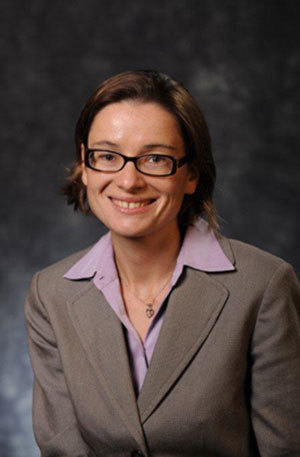 The book examines the strategies behind decisions on whether and how to penalize members of the former authoritarian regimes in Poland, Hungary and the Czech Republic as they transitioned to democracy, as well as the origins of the political parties that emerged in those newly democratic countries.

This is the second win in two years for Nalepa. “Skeletons in the Closet” also won the 2011 Best Book Award from the APSA’s Comparative Democratization section.

Presented by the APSA’s Political Organizations and Parties section, the Epstein award honors a book published in the last two calendar years that makes an outstanding contribution to research and scholarship on political organizations and parties.

“The sheer size and scope of Nalepa’s research design stood out from the very beginning of the evaluation process,” says Mark Brewer, chairman of the prize committee and associate professor of political science at the University of Maine.

“Our committee was even more impressed that she was able to actually carry out the project and produce such significant results. The word seminal was used more than once in our discussions of Nalepa’s important piece of work.”

Nalepa says she is honored — and inspired — by the success of her first book. “It is a great motivation to write my second book, but it has also encouraged me to bring my research to the classroom. I think if two different sections of the APSA think it is worth reading, it will stimulate good discussions.” 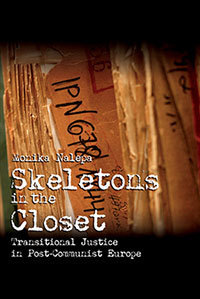 Nalepa, who was born in communist Poland and grew up there during the shift to democracy, says “Skeletons in the Closet” was her attempt to resolve a question that had long perplexed her — why Communist officials had been willing to negotiate peaceful transitions in most East European countries.

“Why would autocrats step down from power peacefully, when what awaits them is punishment?

“After a number of research trips to post-communist Europe,” she says, “I finally found a plausible solution, which is that members of the former opposition had actually collaborated with the Communists a lot more than was previously thought. The new leaders shied away from transitional justice because in the process of doing so, they could expose skeletons in their own closets. Because Communists knew that, they were willing to step down peacefully.”

In the book, Nalepa draws on archival evidence, statistical analysis and extensive interviews to support her argument. “I feel very fortunate that I was able to talk to some of the key players in the transition from communism while they were still alive,” she says.

After just completing a yearlong fellowship as a visiting associate research scholar at the Center for the Study of Democratic Politics in Princeton University’s Woodrow Wilson School of Public and International Affairs, Nalepa says she is eager to return to the classroom at Notre Dame.

“This is going to be a great opportunity to actually incorporate the book into my teaching,” says Nalepa, who will teach an Introduction to Comparative Politics class for first-year students in the fall and a similar course for upper-level students in the spring.

The course, she says, will focus on the political forces at work in countries other than the United States, from post-Communist Europe to the Middle East, Asia and Africa.

“I want to increase the students’ awareness of puzzling events that call for answers in other countries around the world,” she says.

Nalepa is also at work on her next book project, which explores trends in legislative politics in post-communist Europe. “It is about how parties and party political organizations respond to changes in the electorate, how they conduct recruitment, how they set the policy agenda in response to that, and how they discipline their members.”

She is also interested in the origins of such parties and how formerly underground opposition groups and members of ousted authoritarian regimes organize and begin to compete for power in newly democratic countries.

“How do they transform themselves into viable, effective parties that are capable of ruling?”

College of Arts and Letters undergraduates will be able to play a role in her ongoing research, says Nalepa, who enlisted Notre Dame sophomore and native Polish speaker Julia Banasikowski to help code some of her survey data last spring.

“That experience has brought me to realize that I can I can incorporate working with students into my research and in doing so expose them to the challenges, but also rewards of academic research,” Nalepa says.

“I look forward to working with more students such as Julia after I return to campus in August.”