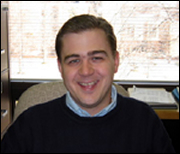 David E. Campbell, a political scientist at the University of Notre Dame, is a co-author of a new book that proposes means to invigorate the political participation of Americans.

Democracy at Risk: How Political Choices Undermine Citizen Participation, and What We Can Do About Itexamines the dangers of civic disengagement and Americansdecreasing involvement in their own affairs.

The authors – a committee of political science scholars formed by the American Political Science Association (APSA) to study civic education and engagement – chart a course in the book for reinvigorating civic participation in the worlds oldest democracy.They focus on three main areas of the American political system: the electoral process, the impact of location, and the role of nonprofit organizations and voluntary associations.

A member of the Notre Dame faculty since 2002, Campbell is an assistant professor of political science and faculty fellow in the Institute for Educational Initiatives.His areas of specialty include American politics, political participation, religion and politics, and educational policy.