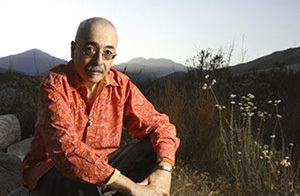 In his second term as poet laureate of the United States, Juan Felipe Herrera will visit the University of Notre Dame on Oct. 5 and 6 (Wednesday and Thursday). Herrera’s stay on campus includes a poetry reading with opening remarks from University President Rev. John I. Jenkins, C.S.C., as well as a reception and visits and lunch with students.

Appointed in 2015 by the Library of Congress, Herrera is the nation’s first Latino poet laureate, the U.S.’s highest honor in poetry. He is the author of 28 books of poetry, novels for young adults and collections for children, including “Half the World in Light: New and Selected Poems” (2008), winner of National Book Critics Circle Award and the International Latino Book Award. He is the recipient of fellowships from the National Endowment for the Arts and the Guggenheim Foundation and two Latino Hall of Fame Poetry Awards. Herrera was elected a chancellor for the Academy of American Poets in 2011 and served as the poet laureate of California from 2012-2015.

Presented by the Institute for Latino Studies and the Office of the President, Herrera’s visit includes a poetry reading and reception open to the public. On Oct. 5, Herrera will read from his work, followed by a Q&A session, from 7 to 8:30 p.m. in the Patricia George Decio Theatre at the DeBartolo Performing Arts Center. Father Jenkins will deliver welcoming remarks before Herrera’s reading. This event will also include a student performance of one of Herrera’s multi-voiced poems, directed by Siiri Scott in the Department of Film, Television, and Theatre, prior to Herrera’s reading. Admission for this event is free, but tickets are required and may be reserved by calling the DeBartolo Performing Arts Center at 574-631-2800.

On Oct. 6, a reception will be held in his honor from 5 to 7 p.m. in the McKenna Hall Atrium. Herrera will be presented a parting gift followed by a brief presentation from students.

“In addition to giving the Notre Dame community the opportunity to experience his poetry, I’m especially pleased that our students, both undergraduate and graduate, will be able to dialogue and engage our nation’s poet laureate,” said Francisco Aragón, associate professional specialist in the Institute for Latino Studies and director of Letras Latinas, its literary initiative.