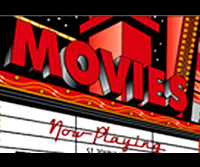 With the summer blockbuster movie season in full swing, studios are spending millions of marketing dollars to convince us that their offerings aremust-seemovies. And legions of critics are telling us which films arehitsand which aremisses.

However, a new study by a Notre Dame physics doctoral student claims that we, the paying public, are the best arbiters of what are quality films.

CésarHidalgoand colleagues attempted to gauge how good theword of mouthwas around a film based on the behavior of moviegoers. They developed a mathematical equation that approximates box-office numbers in the weeks after release.

The researchers fitted their model to the data describing weekly box-office results for a film during its lifetime. The exercise suggested that if studio marketing was very intense but audience reviews were poor, the resulting graph would peak in the first week and then sharply plummet. If word of mouth reviews were good, however, the graph would climb if the initial attendance was low, or decrease slowly if the initial attendance was a considerable fraction of the targeted audience.

Hidalgoand his colleagues compared their graphs with actual box-office data for almost 50 films and discovered that their model was a good match for all types of films, from low-budget offerings to major blockbusters.

A May 31 USA Today article suggests that this summers early films bear out the studys premise. Only an estimated 25 percent of reviews forThe Da Vinci Codewere positive. Yet word of mouth for the film had been very favorable and it opened strongly at $77.1 million in box office revenues.

In contrast,Akeelah and the Beereceived favorable reviews from almost 90 percent of critics who reviewed it, yet has been only a modest box-office success with $16.9 million.

Hidalgo also indicates that up to 70 percent of a films total revenue now comes from outside the box office, in home video, DVD sales and product tie-ins. This means that continuing positive word of mouth reviews are even more important for a films ultimate financial success.

And dont expect the study to necessarily deter studios from producing over- hyped films of questionable merit. Enough initial interest in a film can result in early box-revenues that are so high they more than offset the cost of producing the film and the decline in revenues as negative word of mouth reviews spread.

There may well be anotherIstharin our future.

Hidalgomost likely will miss it.

TheHidalgostudy was published in the New Journal of Physics.